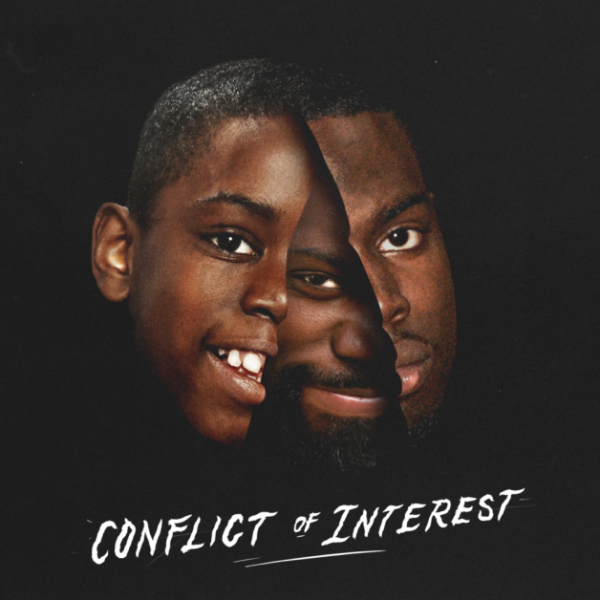 Since the days of iTunes, the idea of albums has changed. Fans no longer had to purchase an album to hear the songs they wanted, they could just purchase it for 79p and play it to their heart’s content. As technology has evolved and streaming has become prominent, it is playlist placement that has become the big thing for artists, albums can be a collection of singles with a view that the best songs will make it on to playlists, the idea of putting out a cohesive project is one that isn’t as common but has made a resurgence over the last few years. With Conflict of Interest, Ghetts has released an album that yes you could choose one song and listen to it and enjoy, but it pays off so much more as part of a project. This album is a story being told, an artist painting a picture, not a collection of singles.

Even the songs that were released previously like ‘Mozambique’ and ‘IC3’ not only sound different within the context of the album, but there are added layers of production, making transitions between songs seamless. The transition between opener ‘Fine Wine,’ a fierce mission statement, and 'Mozambique' is sublime, the build-up in the outro of ‘Fine Wine’ had me eagerly anticipating the start of ‘Mozambique’ a song I have had on repeat since it came out. It had me throwing up gun fingers at 7 in the morning while I made my wife some tea.

The first 6 songs see Ghetts reminiscing. From ‘Fine Wine’ covering his struggles to make it up until this point, ‘Mozambique’ with its interpolation of ‘Top 3 Selected’ and G-Funk style synths giving us a real old school vibe, ‘Fire and Brimstone’ looking back on the things Ghetts had to to get by, the things that even so far removed, still affect him to this day. ‘Hop Out’ recalls his grand theft auto days, closing with a series of old school reload bars, all car-related. And then ‘IC3’, the legendary link up with Skepta one that fans have been waiting for for years, covers what it’s like to grow up as a black man in the UK, but closes out with Skepta spitting his old school ‘Go on Then’ bars and clips from the legendary Skepta, Ghetts and Kano set on Logan Sama.

This section of the album crescendos with ‘Autobiography’ a near 7-minute masterpiece where Ghetts chronicles his whole career, from the N.A.S.T.Y. Crew days, clashes with SLK, P Money and Boy Better Know, the formation of The Movement and Channel U. Ghetts also addresses the purists who might say he has fallen off because he makes music different from what they expect from him. This song is important, Ghetts isn’t rapping at you, his flow gives you the feel of him sitting next to you, recalling his whole career, able to keep your attention at every twist and turn. This is a masterful piece of storytelling.

With that aspect of his life covered, the next 5 track run deals with different types of relationships, Ghetts getting his grown man rap on. Kicking off with the fun garage influenced ‘Good Hearts’ which even features a Mighty Moe introduction, things soon take a turn with ‘Dead To Me’ which chronicles a breakup and how brokenhearted it has left him. This theme continues on the Ed Sheeran featuring ‘10,000 Tears’. Here Ghetts switches up the flow completely, giving us a more melodic, autotuned flow, allowing him to be at his most vulnerable. ‘Sonya’ is another storytelling track, Ghetts recounting the story of a friendship he had with a girl, eventually losing touch with her and finding out that she has become an escort. Ghetts wanted to present a different side with no judgement on this one, he said: “I understand that in this life I’ve done things that can be judged harshly, so I’m not sitting here judging anybody. Are some of the things I’ve done for money in my life any better than escorting?”

Like the first section of the album, this second section builds toward the main event and it is one of the most powerful songs on the album. When I first heard ‘Proud Family’ it put me in a different place, it had me looking at my own relationships with family and within the context of the album it stands out even more. A moving tribute to his family, warts and all, Ghetts lays it all out on this one, from his relationship with his parents to the one with his own children, to look at the concept of a father figure, proudly proclaiming “If I let something slide, you ain't worth the twenty-five, That's for my son and my daughter's sake” This is grown rap in a way we don’t see much of in such a young scene, only someone of a certain age could have the life experiences to record a song like this. This one is special and has had me tearing up while listening in the past. Ghetts voice evokes an emotional element that is rarely seen.

With that, we transition to the last 5 tracks of the album, which sees Ghetts connect with some of the best rappers in the country. The only other feature verse we have had so far was Jaykae on ‘Mozambique’ but on this last track 5 run we get features from Stormzy, Pa Salieu, Backroad Gee, Giggs, Wretch 32 and Dave. These last few tracks are really a chance for Ghetts to do show off his lyrical prowess. Kicking things off with ‘Skengman’ where we get a cameo from Ghetto, like a character from a horror film popping up near the end. This leads into ‘No Mercy’ a thumping banger giving a chance for Ghetts, Pa Salieu and Backroad Gee to shine. ‘Crud sees him link up with frequent collaborator Giggs for a trap-influenced banger giving both MCs a chance to do what they do best. This run of 3 tracks is Ghetts having fun with his friends and peers, showing that he is equally in touch with the past, present and future of the scene.

The penultimate song of the album is ‘Squeeze’ a cinematic track, which bridges the gap and sets up for the final track, one that many were looking forward to when they saw the tracklist, ‘‘Little Bo Peep’ featuring Dave and Wretch 32 with Hamzaa on hook duties. This track links 3 of the most highly acclaimed lyricists together on soulful production giving Ghetts and Dave a chance touch on the topic of being led astray, the different things people can choose to be addicted to or follow. Dave then counteracts this by saying if you choose not to follow trends, you get “you get Kano and Wretch, You get Skepta and Wiley, you get Dave and Ghetts.” The album then closes out with the hook from Hamzaa and Wretch, another indication that this album is about the music and not ego, it’s not his voice that closes out the album, he doesn’t even have the last verse.

Listening to it in one go, the first thing that stands out to me is the musicality. And this covers everything from production to lyrics, to the flow. With ‘Conflict of Interest,’ Ghetts has crafted a meticulous album. The production is beautiful, layered and rich, with beats weaving in and out of Ghetts’ lyrics, providing punctuation on key moments, especially on the storytelling songs. Production has come from a small pool of producers: TJ Amadi, Rude Kid, Ten Billion Dreams, Sir Spyro, Reiss Nicholas, BLK Vinyl and Smasher. With Ten Billion Dreams having credits on 8 songs and TJ Amadi on 4 (along with an Executive Producer credit), the sound is consistent, with the transitions between songs taking the listeners on a journey.

Ghetts as an MC has always been top tier, but he takes to a different level on this. Ghetts seem deliberate in his choice of bars, not a wasted line is said. His flow is at his most calculated and experimental, pushing his own boundaries for the sake of the quality of the song. This is Ghetts focused in a way we haven’t seen before, thoughtful and intricate in his choice of words and delivery. The crazy wordplay is still there, but they are combined with moments of honesty which make them really stand out.

Growing up listening to Ghetts, on 2000 and Life, on the DVDs, on Fuck Radio, it was the bars and the flow that would get us gassed, the multisyllabic rhymes, the aggression. When he released 'Ghetto Gospel,' we got an insight into another side of Ghetts, a more introspective artist. With 'Conflict of Interest,' Ghetts has taken everything we love from him and refined it to a point where he sounds better as an artist than we have ever heard him before. I liken it to a story Rory told on The Joe Budden Podcast when he was at the Roc Nation brunch, and Jay-Z, someone who many consider the GOAT, whispered to him “I’m getting better.” That is the feeling I get from Ghetts with this album, but it’s not a whisper, it’s a proclamation.

‘Conflict of Interest’ is an album that deserves all the plaudits it will receive. For someone to be in the game for over 15 years and show this level of skill is commendable. For me, this album is a game-changer, a blueprint for artists going forward on how to make a mature album that doesn’t compromise the artist. I am going to go ahead and say it, this one is a future classic, one fan will be revisiting for years to come.