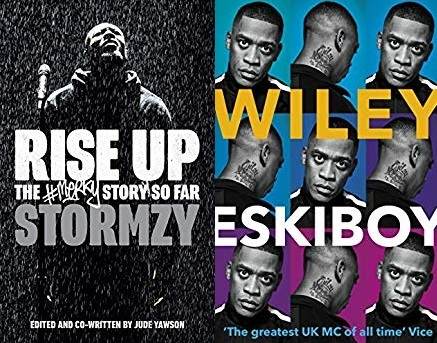 With Wretch 32’s Rapthology book being released this month, he adds to what is a steadily building library of Grime books.

Wretch’s book has been described as part autobiography, part guidebook and part cultural history, as not only does he talk about his life, he also covers how he goes about writing songs and also songs from the past 30 years that mean a lot to him. Wretch's book is the latest to document the grime scene in some form.

Over the past few years we have seen books covering the forming of the genre, essential songs, the socio-political aspects around the genre, and biographies from key figures. And as the genre continues to grow and expand, I am sure we will see more writers and artists release

This is Grime by Hattie Collins

Put together by legendary grime journalist Hattie Collins and with photos from Olivia Rose, this oral history tells the story of grime from its early days up until 2016 when the book was released. Covering everything from Channel U, raves, Rhythm Division, DVDs, the early grime blog scene and forums and with input from Dizzee, Kano, Wiley, JME, Stormzy, Jammer and even Crazy Titch, this book is essential. The book even goes a step further, highlighting the behind the scene staff including mangagers, A&Rs, journalists and photographers. Grime has always been more than just about the music, it is a culture, and it is only right different parts of that genre are highlighted.

This book is special because it is the story of grime told by those who formed, who are part of it and who are influenced by it. And that makes the book personal, reading how these artists interact with each other is one of my favourite parts of the book.

I picked this book up by chance after seeing it in a Waterstones in Reading and couldn’t put it down. Jeffrey Boakye has put together a tome of essential grime songs, and used them as a launching point to discuss the social context around the song. For those who grew up in the early days of grime, reading about these songs immediately takes you back. Starting with Amen, Brother by The Winstons, Boakye draws a line through the songs that influenced the genre, everything from Cutty Ranks to London Posse then to Pay As U Go, So Solid and Ms. Dynamite until finally the genre of grime emerges with Pulse X by Musical Mob and Creeper by Danny Weed. The revised edition goes all the way up to 2018, and the book includes essays on such classics as Lethal B’s Pow, Mr. Wong’s Orchestra Boroughs, Kano’s P’s and Q’s, Tempa T’s Next Hype, Skepta’s Shutdown, AJ Tracey and Dave’s Thiago Silva, and Ghetts’ The Cypher amongst many others. The 2 part essay on Too Many Man is hilarious. Albums also get a look in with Wiley’s Godfather and Stormzy’s Gang Signs and Prayers getting coverage.

London is intrinsic to the story of Grime, East London in particular. And in Dan Hancox’s Inner City Pressure, this is really highlighted. Charting the story of Grime from its humble beginnings in E3, the birth of the genre from disenfranchised youth, to where it is now, one of the dominant genres in the UK, Hancox describes the seemingly insurmountable odds that the genre and its artists faced to get where they are today, having to jump over hurdles like ASBOs for pirate radio, Form 696 stopping live shows, closing down of youth clubs, gentrification and more. Hancox’s book is as much a story of grime as it is of the city that birthed it, painting a picture of a city that has changed, and continues to change, so much over the last 16 years. Hancox frames grime within the wider context of what was going on in the city including gentrification, new Labour , the 2011 riots, Grenfell and Grime4Corbyn, Hancox book is essential reading for those interested in the sociology behind the genre.

Dan Hancox also released a Kindle book called Stand Up Tall, covering Dizzee’s career around the time of his first 2 albums. Starting at the historic Conflict DVD confrontation between Dizzee and Crazy Titch, the book charts the history of East London, the creation of the classic Boy In Da Corner and then a look at the follow up, Showtime, which while not as revered as his first, is still a very solid album.

The Godfather himself, Wiley released his autobiography in 2017. Told very much in Wiley’s voice, including tangents and anecdotes galore, Wiley kicks things off with “I hate bullshit books. I’ve read a lot of biographies. Most of them are boring.” This is indicative of what you are going to get for the rest of the book. Charting Wiley’s career we learn about his musical roots, pirate radio, Pay As U Go, Roll Deep, Dizzee, the mainstream, Boy Better Know all told in Wiley’s brutally honest way.

Wiley’s book was the first autobiography from the grime scene, and with someone as iconic as Wiley, you need to have this in your library.

DJ Target, the legendary producer and DJ, released this book last year. Charting the pre-grime days of Jungle and Garage, Target goes in depth on the early days of Grime and Roll Deep, giving a first-hand tale of the beginnings of the genre and those who formed it. This book in particular highlights how young everyone was in the early days and how local the scene was. This is exemplified through some of the personal stories Target tells about a young Dizzee and Wiley and going on summer trips to do shows.

Rise Up: The #Merky Story So Far by Stormzy and Jude Yawson

The book has contributions from people such as Stormzy’s manager Tobe Onwuka, his brand manager Akua Agyemfra, his producer Fraser T. Smith, his publicist Rachel Campbell, music video director Kaylum Dennis, engingeer Manon Grandjean, #Merky Manager Ayesha Lorde Dunn, tour manager Trevor A. Williams A&R of Atlantic Records Alec Boateng, Merky Records President Flipz, DJ Tiiny and Austin Daboh, who at the time was as Spotify. With this line up interviews, you got an all-encompassing insight into a burgeoning career.

I’m sure this is the first of many books from the man himself, so be sure to pick this one up to start the collection