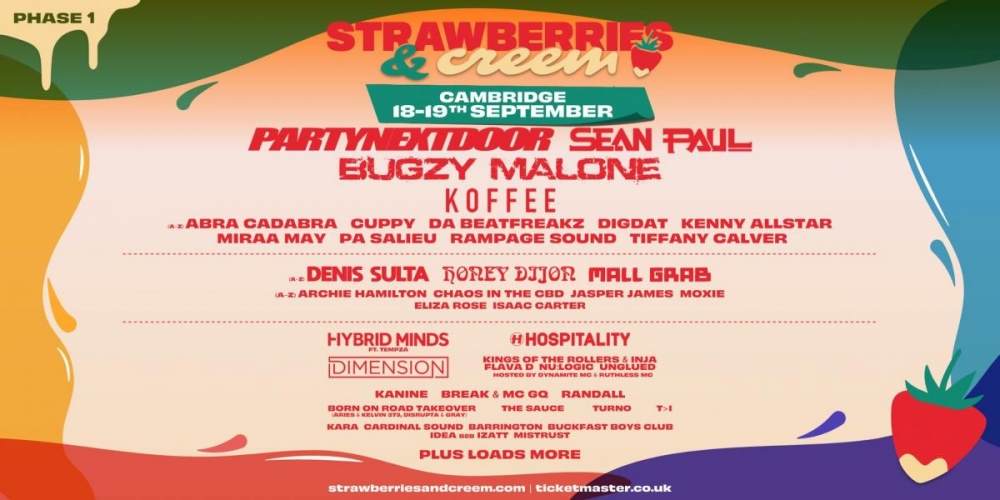 Strawberries and Creem Festival have announced new dates for September this year.

The venue is Cambridge's beautiful Childerley Orchard, an ideal setting for a festival of its kind. After the past year, Strawberries and Creem Festival provides something to look forward to — and proposes to be one of the hottest festivals this year.

With an incredible fusion of Hip-Hop, Afrobeats, Dancehall, House, Garage and Drum and Bass, this year is going to be Strawberries and Creem's biggest year yet. The line-up already boasts the likes of PartyNextDoor, Sean Paul, Koffee, Bugzy Malone, DigDat, Hybrid Minds, Kings Of The Rollers, Denis Sulta and a host of other talent yet to be announced.

Along with these big names Strawberries and Creem is still staying loyal to one of its principles which is pushing the cream of the crop in youth culture. From football and gaming to entertainers, podcasts and comedy, Strawberries and Creem allows festival-goers to experience a huge celebration of great music, good vibes and plenty of food and drink.

2021 ticketholders, prior to the announcement, are instantly eligible for the new September dates.

Tickets are available to purhcase now on the Strawberries and Creem website here.

The next Producer Linkup will be at Boxpark Shoreditch!

Aitch performs at London's O2 Forum, here's a review of how it went.