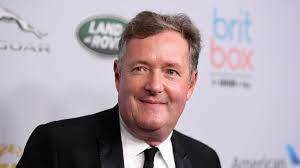 Piers Morgan's comments about the Duchess of Sussex on Good Morning Britain have attracted a record number of complaints to TV regulator Ofcom.

After the docuementary aired Morgan said he "didn't believe" a word Meghan had said and left the ITV programme later that day. He added that "the fact that she's fired up this onslaught against our Royal Family I think is contemptible". He briefly walked off the programme after clashing with weather presenter Alex Beresford, and he was criticised by mental health charity Mind.

Morgan later conceded that it was "not for me to question if she felt suicidal", but has defended his "right to be allowed to have an opinion".

The total of 57,121 complaints including the duchess who complained to the watchdog. This is 12,600 more than those made over a race row on Celebrity Big Brother in 2007.

Morgan responded on Twitter: "Only 57,000? I've had more people than that come up & congratulate me in the street for what I said. The vast majority of Britons are right behind me."

Ofcom, which has regulated British TV since 2003, has already launched an investigation into Good Morning Britain. On Wednesday, a spokeswoman said the investigation was ongoing.