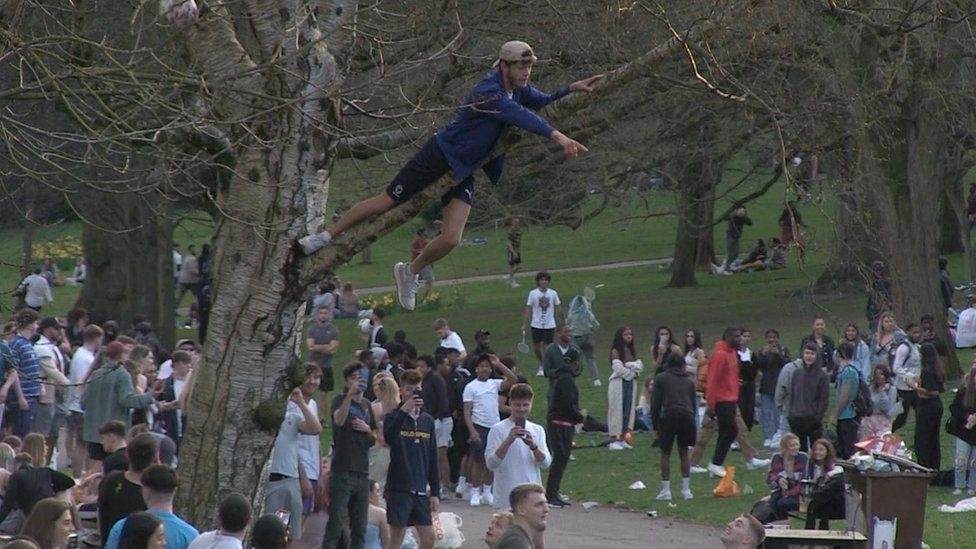 Police have warned people to stick to coronavirus rules after large crowds were seen drinking in a city park on the day restrictions eased. Videos shared on social media showed some hugging and others pushing and shoving at Nottingham Arboretum.

Huge crowd seen dancing, drinking and fighting in #Nottingham park. Dozens of people were seen at the #Arboretum on the first day the #RuleOfSix was reintroduced and #lockdown rules were partially relaxed. it is not known if @nottspolice issued any fines. pic.twitter.com/HSMv4tr4GD

One local resident described the scenes on Monday as "horrendous". Police said they had now put a dispersal order in place to prevent similar scenes over the next few days. Since Monday morning, two households or groups of up to six people have been allowed to meet outside in England.

Footage appeared to show multiple instances of social distancing being ignored as large numbers began gathering from the afternoon and stayed into the evening.

As a result of the scenes on Monday, officers were seen stopping people at the Arboretum gates checking bags for alcohol, which is prohibited under a public spaces protection order. The most recent figures show Nottingham had a coronavirus infection rate of 72.7 per 100,000 people in the week up to 26 March - higher than the national average of 54.7.

For a period in October, the city also had the highest infection rate in the UK. Earlier this month Nottinghamshire Police brought in dispersal orders in Lenton and the Arboretum to prevent further flouting of lockdown rules after reports of anti-social behavior and house parties.