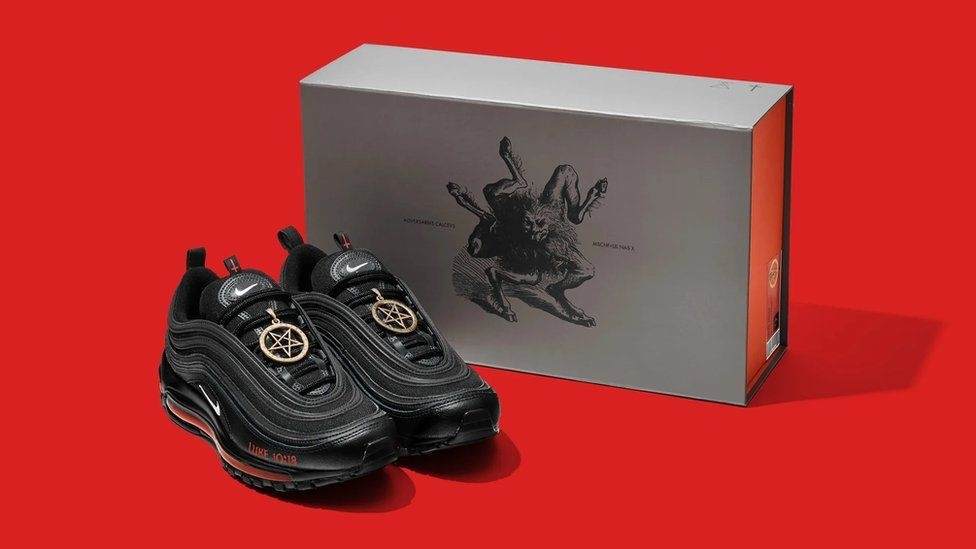 Nike has won its lawsuit against Brooklyn art collective MSCHF over their controversial 'Satan Shoes' that contains a drop of real human blood in the soles... The £740 trainers are modified Nike Air Max 97s that feature an inverted cross, a pentagram, and the words "Luke 10:18". MSCHF produced the shoes in collaboration with rapper Lil Nas X. On Monday, Lil Nas X and MSCHF's Satan Shoes sold out in less than a minute.

Nike reportedly claimed trademark infringement, asking a federal court in New York to stop MSCHF from selling the shoes. "MSCHF and its unauthorised Satan Shoes are likely to cause confusion and dilution and create an erroneous association between MSCHF's products and Nike," the sports shoe giant said in the lawsuit."

Lawyers for MSCHF countered that the 666 pairs it created were "not typical sneakers, but rather individually-numbered works of art that were sold to collectors for $1,018 each". Siding with Nike, a federal judge issued a temporary restraining order on Thursday. Not sure what this means as it wasn't clear what the impact of the ruling remains however MSCHF had indicated it has no plans to produce any more pairs of the shoe.

MSCHF "dropped" the black and red shoes on Monday, coinciding with the launch of Lil Nas X's latest song Montero (Call Me By Your Name), which debuted on YouTube last Friday.