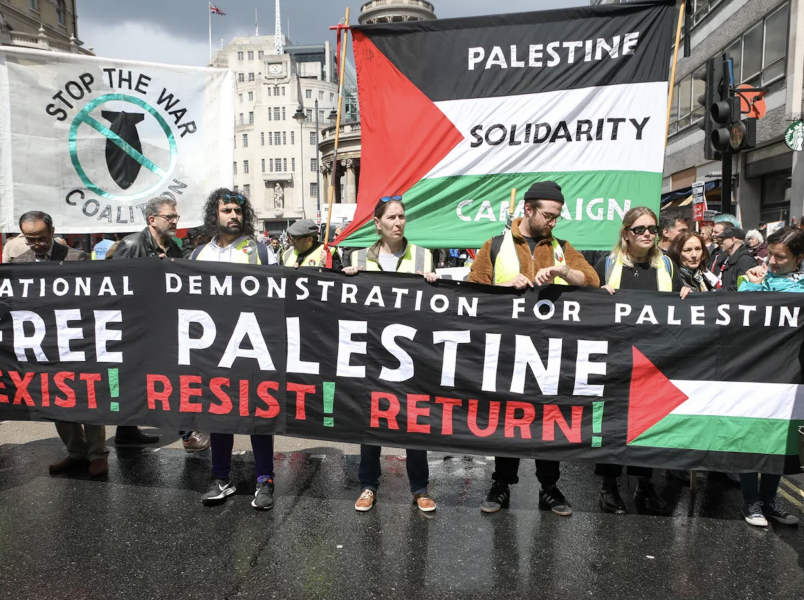 Thousands of people showed up in London on Tuesday to protest Israeli attacks on Gaza and ongoing police brutality at the Al-Aqsa Mosque compound. Protesters gathered in front of government offices at 10 Downing Street in the evening with heavy police presence.

Some banners carried at the rally read “Free Palestine,” “Israel is a terrorist state,” and “Occupation No More.” Protesters carried Palestinian and Turkish flags while condemning the bombings in Gaza and incidents around Al-Aqsa Mosque and asking the British government to end its support for Israel.

Former Labour leader Jeremy Corbyn was among those who joined the protest. A group with Israeli flags was removed from the scene under police protection following a brief provocation attempt. The protesting group later marched toward Israel’s London embassy in Kensington, where police took precautions with a number of officers, including armed units. The British government has kept silent on civilian casualties in the region.

“The UK condemns the firing of rockets at Jerusalem and locations within Israel,” Foreign Secretary Dominic Raab tweeted Monday.

“The ongoing violence in Jerusalem and Gaza must stop. We need an immediate de-escalation on all sides, and end to the targeting of civilian populations.”

The number of Palestinians killed rose to 28 in raids Tuesday by Israeli forces on the Gaza Strip, including 10 children and a woman, according to the Palestinian Health Ministry. The ministry said the number of injuries had climbed to 152.

The ministry put the number killed at 26 on Monday. One of the children killed was a 10-year-old girl and the others were boys of various ages, according to the ministry. Israeli warplanes launched raids beginning late Monday in separate areas of the Gaza Strip in Operation Guardians of the Wall.

The army announced Tuesday that it had targeted 130 sites and assassinated 15 Hamas activists since the start of its incursion in the Strip.

Tensions moved to Gaza after Palestinian factions gave Israel a deadline of 1500 GMT Monday to withdraw its soldiers from Al-Aqsa Mosque and the Sheikh Jarrah neighbourhood in occupied Jerusalem and release detainees.