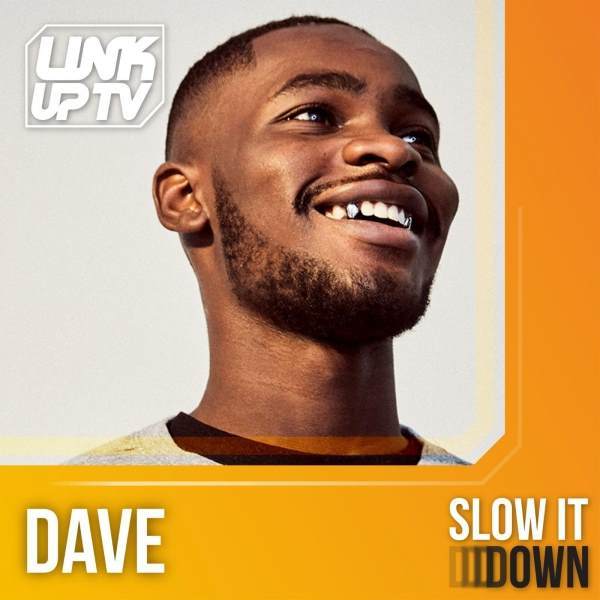 UK rappers are some of the best in the world when it comes to inserting punchlines, metaphors and double entendres into their bars. Slow It Down is a new feature brought to you every fortnight to dive into an artist and their lyrics. Whether they bars have multiple meanings, make reference to something out of the ordinary, or just simply need extra appreciation, Slow It Down is here to highlight them.

In this weeks edition, I'm delving into some of my favourite lyrics from the young King that is Dave. Dave is ahead of the gave and one of the best when it comes to wordplay. Something he has consistently displayed since his entrace into the scene at a young age. The talent he possesses has seen him rise to the top of the UK scene, achieving BRIT awards, a Mercury Prize aware and overseas recognition from other notable artists such as Drake.

"I just find it funny how you can't give a hand to Palestine but you can trade whole arms with Saudi Arabia" - Dave on Question Time.

This bar instantly stands out as, although this track came out back in 2017 as a part of Dave's 'Game Over' EP, the relevance and the weight that it still holds is astonishing. Especially with what is still happening today in Palestine. Dave has always been very politically aware of what is going on in the world and here is no exception. This bar is a simple message to the American Government aimed to send a message to politicians and leaders across the world about what Dave thought at the time, and addressing an important issue. Right now Palestine is under attack so this bar holds a lot of weight as Dave explains that he finds it funny that America could not help Palestine (give them a hand) when back in 2017 they were suffering from Israeli attacks, but they would happily trade weapons (arms) with Saudi Arabia. It raises a very good question as to the motivations behind why these countries, including the UK, could not help Palestine; although they had the means to.

"My mummy tryna wake me up for college in the morning is the only time a human on this earth has ever rushed me" - Dave on Hangman.

This bar is one of the more simple ones and most can pretty much interpret what he is saying at face value. If you're not used to slang, or from overseas, then you may use the word "jumped" instead of rushed. Although it was easy to catch, it just sounded so good the first time I heard it that I still love it now. Dave is simply saying that even when he has had beef with people in the past, they have not done anything. There aren't any hidden meanings, it's just a slick way of letting people know that he has never been on the wrong end of any beef, almost as if to say he's untouchable.

"My new ting came with kids and that's okay 'coz I am still d**king it, little man wanna jump on FIFA, so I'm close to the son like Icarus" - Dave on Professor X.

If you know about Icarus then you will understand this line instantly, but if you don't then it is likely to go over your head. Dave is talking about his new girl having a child but this not being an issue for him. He goes on to talk about how he played FIFA with the child, meaning he is close to the son 'like Icarus'. Icarus was a figure in Greek mythology who famously flew 'too close to the sun' because he was so intoxicated by the experience of flight that he just went higher and higher. Once understood, the very very clever play on the word son/sun makes this a very cold bar.

"I'm in East tryna link my girl 'coz I've got a baby across Bow like Cupid" - Dave on Streatham.

Here is another "if you know" case, as if you know about areas in London you should completely understand why this bar is so good. Even those who don't fully understand, will still think it sounds good. Dave is talking about linking a girl in East London which is where the first part of this bar takes us. Dave is saying he has a 'baby across Bow' – Bow being part of the Tower Hamlets area in East London – but Cupid as I am sure everyone knows is a baby with a crossbow. This is one of those that if you say it yourself at normal speed and then slow it down, you see the angle Dave is taking.

"I've never been known for wifing hoes or Twitter beef, I'm tryna turn green and white to red like Italy" - Dave on JKYL+HYD.

This was a very young Dave on one of the first songs of his that I ever heard. The message is simple, but the way he has worded it is smart. To this day it's probably still one of my favourite Dave lyrics. Dave is making it clear that he doesn't care about internet drama or chasing women, he just wants to get his money up. But the way he has worded this is what I love. He says he's 'tryna turn green and white to red like Italy' which is a sick way of saying he was putting that work in off of selling 'green and white', and turning it into red which if you are from the UK you will know he is talking about a £50 note. Looking at that information, and then looking at the Italian flag which is three colour blocks going from green, and then to white, and finally red.

Dave has a skillful pengame that takes simplicity and makes it complex enough to enjoy. There are so many more bars of his to delve deeper into, and maybe in the future Slow It Down will revisit his catalogue. But these are just a few of the favourites. What are your favourite Dave bars?

Listen Up: Crae Wolf shares why she crowned herself "Queen of Flow", her new single 'Side Eye' and more...

Slow It Down 07: Little Simz

Hurricane Hunt and TomInTheChamber share what it's like making music as a duo, how they met and more!

Slow It Down 06: Avelino

Kwengface speaks to us about his new project, finding his sound, and more!

LISTEN UP: Shaqy talks to us about his re-branded return to music and more!

REVIEW: Dave's stirring sophomore album 'We're All Alone In This Together' lives up to debut