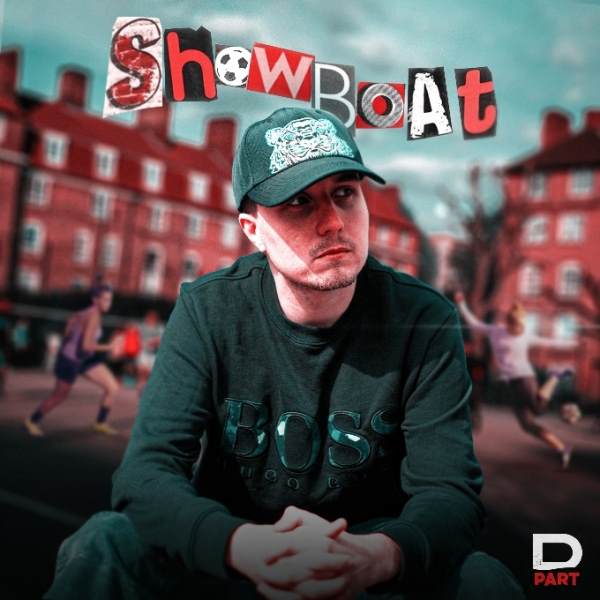 London based rapper Dpart spoke to us about his brand new single 'Showboat' which has just been released with a music video in collaboration with SoccerAM and Street Panna.

Dpart is a rapper from North West London who has been making music for almost 13 years. Growing up in the Perryfield estate of West Hendon, Dpart hasn't had it easy, but that only motivated him to work harder to share his message to others with similar experiences.

"I lost my mum really young and my Dad has always been in and out of jail and I am the first to admit that music saved my life. Without it, I probably would have ended up dead or in jail to be honest.", said Dpart. "Now I just want to talk about my issues and experiences as openly as possible so people know they are not alone in theirs".

"To think like someone like me, who doesn’t have the biggest following, has had one of the most downloaded projects in the whole country twice, when tens of thousands of people release music every day, is absolutely insane to me. And doesn’t even feel real to me. But I am all about legacy and I can’t wait to tell my kids about it, so they know that anything is possible. Aside from this my career highlights include doing a live stream with Declan Rice and having my song played at the London Stadium West Ham's home ground".

His new single 'Showboat' comes as a partnership with SoccerAM and Street Panna who are huge in the world of football–something which Dpart is a massive fan of, so when the opportunity arose to make a song for the showboat section of the SoccerAM show it was one that he couldn't turn down. "They came across ‘Declan Rice’ and played it and then I [asked] them "Has anyone ever done a tune specifically for the showboat section?" and they said "No, but would you like to?" and I was all over it. Fenners (the host) really deserves a lot of credit because unlike a lot of people In the industry he genuinely doesn’t care about clout, or a following. He just respects good music and gives it a platform which I respect".

Following the success of Declan Rice, 'Showboat' is another song with a football twist from Dpart. And who can blame him? The formula clearly worked for him the first time round and he is not afraid to admit this. "I feel it worked well especially in the West Ham community because it's like a family and I kind of feel like I have been accepted as their resident rapper after the support they showed me with Declan Rice. To be honest I didn’t/don’t want to be pigeonholed as a ‘football rapper’ and didn't actually plan to do anything else football related for a while, at least. But the opportunity was too good to turn down and I'm so glad it's come together as it has.

"I feel like ‘Showboat’ is so much more than just a football song and really delves into what it is like growing up in London. It just so happens that football is massive part of that".

'Showboat' is full of energy and is the ideal concept of the street football and showboating that you get on the football pitch. With football and street football being such a massive part of British culture–especially in London–the collaboration works well. Fom the track to the music video, the concept has been brought to life in a way that looks enjoyable.

"It is by far the most fun I have ever had on a project. I literally put myself in the shoes of a 15 year old growing up in my estate playing Wembley in the cages again. It was nice to not be making something so deep this time. All the deep stuff does take a toll on you in the writing stages when you are basically sifting through the wreckage of your mind. Football is a massive part of London culture and a big passion of mine, along with music. I just wanted to fuse them in the best way possible and I think ‘Showboat’ does a good job with that."

Check out the 'Showboat' visuals below. If you are a SoccerAM fan you will be seeing this in the Showboat section very soon.