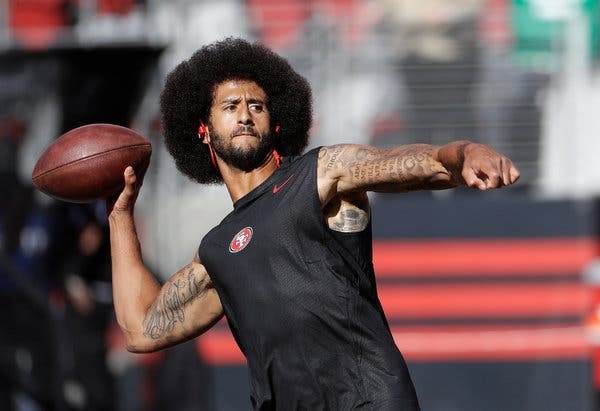 On Saturday November 16th Colin Kaepernick will take part in a private workout in Atlanta, showcasing himself to the major franchises of the NFL.

The ex 49ers quarterback has been shunned by the league and its teams for years now, ever since he bravely took a stand against injustice in the United States by taking a knee during the pregame national anthem. To many, the actions of Kaepernick have been heralded for raising awareness, and headlines were made last year when Nike enlisted him for a major ad campaign. Just last month representatives of the star stated that they had received little to no response from the 32 current league teams, and it seems this open workout has been arranged partly in response to this.

Teams unable to make it in person will be provided with video footage of the on-field trials and interview upon request, as they judge his level of fitness and game ready mentality. A statement from the sports governing body read:

"Earlier this year, we discussed some possible steps with his representatives and they recently emphasized his level of preparation and that he is ready to work out for clubs and be interviewed by them. We have therefore arranged this opportunity for him to work out, and for all clubs to have the opportunity to evaluate his current readiness and level of interest in resuming his NFL career."

Kaepernick himself seems raring to go, and given the hardship and unjust sanctions handed to him in recent years, we hope to see him back where he belongs. Are you NFL fans ready to see him take the field once more?

I’m just getting word from my representatives that the NFL league office reached out to them about a workout in Atlanta on Saturday. I’ve been in shape and ready for this for 3 years, can’t wait to see the head coaches and GMs on Saturday.