HomeNewsSwimmers enjoy world’s first crystal-clear Sky Pool, but its restricted from some residents

Swimmers enjoy world’s first crystal-clear Sky Pool, but its restricted from some residents 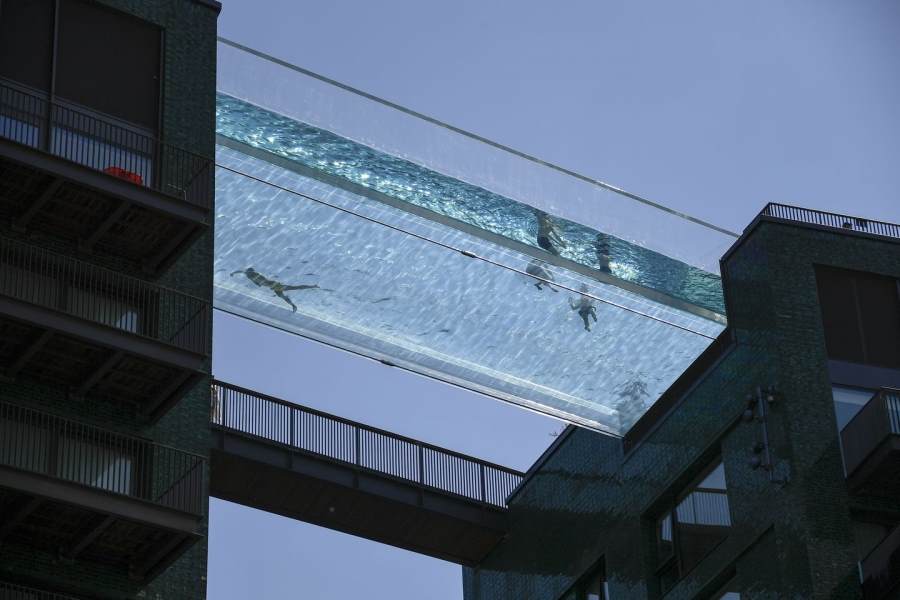 As Britain enjoyed the warmest day of the year, swimmers have been spotted in the world’s first floating pool, 115 feet above London with views of the London Eye and Houses of Parliament.

The Sky Pool is built between two skyscrapers in Southwest London and opened on May 19, just in time for residents to enjoy it during the bank holiday weekend.

The structure is 25 metres long, five metres wide and three metres deep. The transparent pool made from acrylic is reserved for people who live at the Embassy Gardens flats and their guests.

Embassy Gardens website reads: "Suspended 35m in the air, the Sky Pool has captured imaginations across London and far beyond. The world’s first floating pool is exclusively for Embassy Gardens residents and their guests.

"This crystal clear, 25-metre-long pool seems to float in the air. Dive in and there’s nothing but clarity between you and the world below. There’s no other pool in the world like the Sky Pool."

However, the pool is not exclusive to all residents which has led to some criticism.

According to the company that manages the unit, lower-income residents do not have access to the pool because they do not pay a fee.

Residential developers in London are required to allocate a percentage of their units to lower-income residents.

Nadeem Iqbal, a resident at Embassy Gardens, told The Guardian that the pool cannot be used by those living in shared ownership flats either.

He also said the building has different entrances for the affordable housing and private sections of the apartment complex. Referring to his own entrance as the 'poor doors'.

“We have a front-row seat of the Sky Pool...but the sad thing for us, living in the shared-ownership building, is that we will never have access to it.

"It’s only there for us to look at, just like the nice lobby, and all of the other facilities for the residents of the private blocks.

"Nobody expects these amenities for free, but we’re not even given the choice to pay for them.”