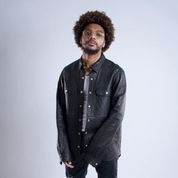 Introducing up and coming to UK artist ITHINKTHATSRIO with his debut single ‘AFRO’! The melodic rap track comes six months after the London native burst onto the scene late last year with his ‘Prayer’ freestyle that caught the scene’s attention. ‘Afro’ sees IThinkThatsRio waxing lyrical about having the freedom to do what you want, whether that is with your hair or with your career. For the accompanying music video, IThinkThatsAfro has collaborated with burgeoning London-based visual director and photographer EazyVisuals (Ebenezer, B Young, Ryan De La Cruz, Michael Ward) to bring the infectious track further to life.

Speaking about the inspiration behind ‘Afro’ and how the song came together, IThinkThatsRio says, “creating ‘Afro’ was such a vibe. I was in the studio with TheLifeOfKG when this Grossgod beat came on, and the first thing that came out of my head was ‘take out my braids, just roll with an afro’, and the rest came together from there. As well as the track just being a vibe, I believe the message behind it, which is that we should be free to make our own choices, without fear of ridicule or judgement from other people – in my case, it’s how I wear my hair sometimes”.

Originally from Chadwell Heath in East London, IThinkThatsRio has always had a passion for music, but he has been on course to become a professional footballer for a good few years, but after turning 20 last year and realising that music had the power to help him express his feelings, and how that made him feel, he began taking music seriously, and quickly charted a new course from a footballer to a musician. Following his debut single ‘Afro’, IThinkThatsRio is poised to leave a huge dent on the 2021 freshman class with a slew of upcoming singles!