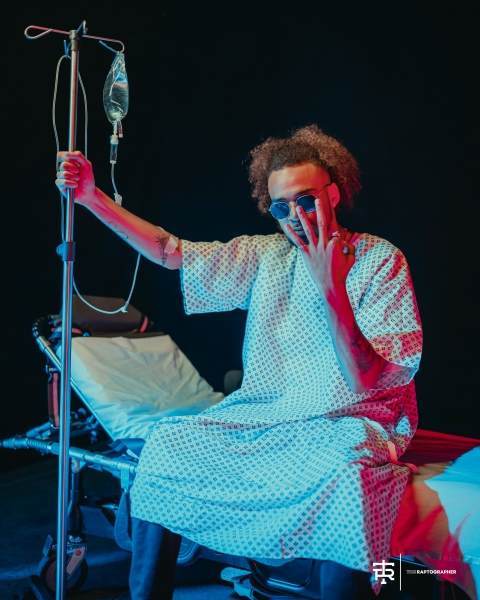 Beginning 2020 in a hospital bed unable to walk, it would have been easy to write off the year for August.III. Instead, sitting in his dressing gown, with only an old-school Apple headphone mic to hand, August.III recorded his debut EP – Hospital Talk. Having gone under the knife to correct a stomach issue, August was stuck in St James’ Hospital, Leeds, until just before the lockdown. A series of misdiagnoses – everything from IBS to mental health troubles – failed to spot the real issue leading to a series of surgeries and a lengthy recovery period. “I was low, I was feeling unwell. It is at those times that you really have to pick yourself up and decide how you want to proceed,” he says.

The EP covers the gambit of urban music, with the new wave of UK rap, trap and drill. “Each track has a different sound,” he says.

“I was just out of hospital, writing every day. You can hear the pain in my voice while I’m recording. When I listen back, I can hear the same vibe and lyrics come through different tracks. I was in my zone. That still affects me today and is a part of what I write. Something I was down from has got me here.

“Even though I was in a dark place I wanted to focus on what I wanted to achieve when I got better. For the good of my mental health, I knew I had to focus on the future and let my mind go there. Now I have the opportunity to fulfil that potential.”

Lyrically, Hospital Talk reinforces that intent with lines including; ‘Sky is the limit’, ‘I want hundreds and fifties’ and ‘I don’t take L’s [losses] I take W’s [wins]’.

Limitless, the first track on the EP, is released as a single on 28th May. The visuals for the track show August.III in bed in a hospital gown before being broken out of hospital by his boys and being driven away in an ambulance. Eagle-eyed viewers will spot references to the full EP tracklist throughout the video.

It was this tenacity to create music that caught the attention of indie label Marylebone Records to sign August.III. It is on this label that he dropped his first major single Paaji - an afrobeats track which caught the attention of BBC Asian Network and has now had more than 200,000 Spotify streams - and follow-up drill track, Do My Dance, which received playlist support from Kiss FM.