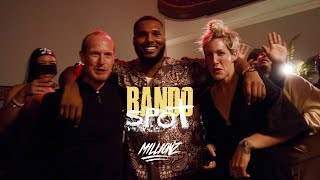 Birmingham rapper M1llionz has released visuals for his latest track "Bando Spot". Featuring his highly-awaited debut mixtape "Provisional Licence", that is releasing this summer, "Bando Spot" is produced by Jevon and Honeywoodsix.

Taking inspiration from 50 Cent's iconic hit "Candy Shop", M1llionz puts his own spin on the track dropping a drill release. From start to finish he brings his dynamic flow and artistically delivers a track to remember.

Following through with the visuals similar to the 50's video, the classic mansion and the array of models make an appearance with M1llionz taking centre stage.

M1llionz is set to keep making moves with his string of releases, upcoming mixtape and recently been revealed the rapper has been labelled as 'Artist on The Rise in the UK for 2021' by YouTube Music.

Take in “Bando Spot” below!