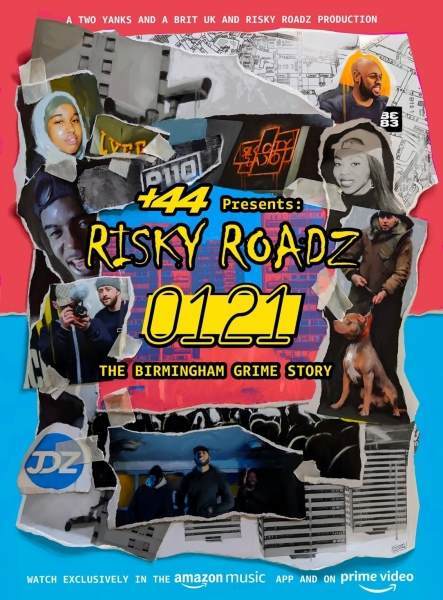 Uncovering the innovative nature of the fast-emerging Black music scene in Birmingham, the film celebrates the entrepreneurship, loyalty and sheer determination that championed a small culture with rough beginnings to centre stage across the globe. Risky Roadz 0121 shares his take on the story of Birmingham and highlights some of the city’s biggest talents – with the help of some integral figures who shape the scene, from radio stations to the likes of Lady Leshurr, Jaykae and Mist.

Risky Roadz 0121 has been exclusively released on Amazon Music and Amazon Prime Video today (June 25), and was birthed from Roony and co-collaborator Toby Robson’s (Two Yanks and a Brit UK) shared desire to explore independent music culture with a Grime lens.

Speaking of the film, Toby Robson said: “The pinnacle of modern youth cultures in Britain, regardless of how they manifested, all share the same DIY mindset and clear sense of self. This is where we, culturally, are at our strongest. Grime culture is at the forefront and is the current epitome of independent music culture. Nowhere represents this more so than Birmingham and what better way to do this authentically than through the infamous Risky Roadz lens, after such a lengthy hiatus.”

The documentary release follows a 12-year sabbatical for Roony, who has been known to document the scene’s creativity. To make another documentary under the Risky Roadz brand, Roony wanted the story to be worth telling – Birmingham’s story is worth it.

"UK music and culture are at the top of their game right now, with our sound topping the charts and stealing hearts. For me to use the Risky Roadz name again for a documentary it had to be a story worth telling: the Birmingham grime scene and the infrastructure that's made it, is just that," said Roony.

“When grime was quiet in London, Birmingham was still going strong. We’ve all come so far, myself included, and to really appreciate the journey you have to look at places that don’t always get the credit they deserve. Birmingham is one of these places and a place special to grime and myself. The DIY ethos lives strong here and Risky Roadz 0121 will show you everything you need to know about the independent mentality. You have an idea you want to make happen? Make it happen. The only person stopping you is yourself, so dream big.”

Risky Roadz 0121 will be accompanied by the '+44: 0121 Birmingham' playlist, full of Amazon Original tracks from Birmingham’s best-known Grime artists.

'+44 Presents: Risky Roadz 0121' is out now on Amazon Prime Video and the Amazon Music app.