HomeExclusivesSlow It Down 05: Football Bars Special

Slow It Down 05: Football Bars Special 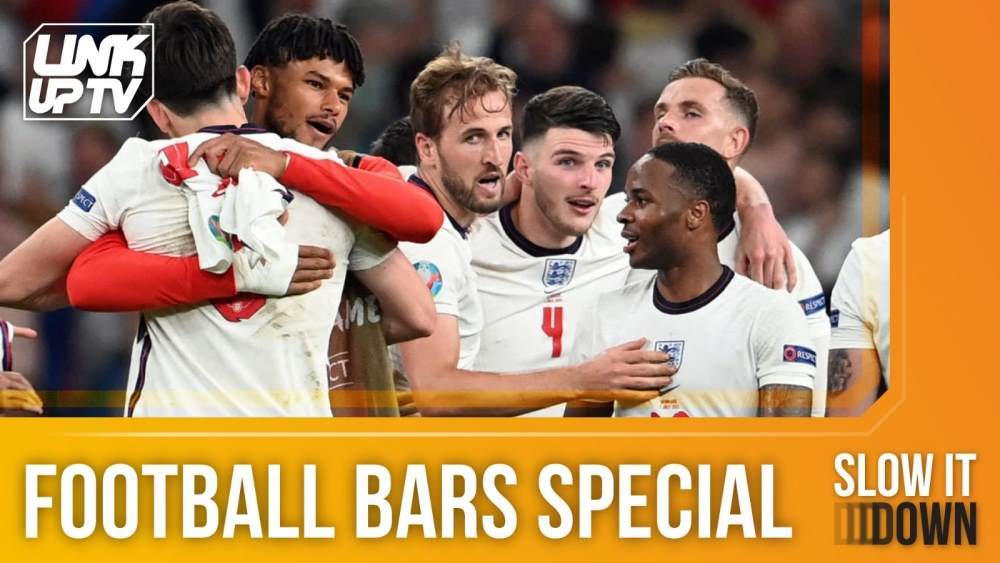 As we all know football is a massive part of the culture in the UK from grass roots level all the way to the elite level of the Premier League, Champions League and International tournaments, like the Euros and the World Cup. Rappers in the UK acknowledge this time and time again and use their football knowledge to create some very sick and very creative bars.

To celebrate the success of the England team making their first final in a major tournament since 1966 and making the whole country proud with how far they took us this year, this weeks instalment of Slow It Down is going to look at some of the best football bars UK rappers have blessed us with over the years.

"Call up the young G's you know what it is when I'm Bellin' 'em. Who's on Krept then like man won't check them when the ting rise like Declan" - Krept on Olé (We Are England) featuring S1lva, Morrisson and M1llionz

It would be easy to choose absolutely any bar from this track as it as absolutely packed full of sick football bars from all artists involved. This one particularly stood out for me purely for Krept's slick delivery. "Bellin' 'em" is a play on Jude Bellingham's name and the Declan Rice bar at the end is quite easy to catch as well. The use of footballers names in a street context like this stands out and the rappers do this so well.

"I ain't going back on the wing, cah I know feds wanna see R with a 7" - RV on Top Striker (Remix) by Blase and Luxo feat Chip and RV

This one is a very smoothly executed play on words related to one of the best players to ever play the game – Cristiano Ronaldo. The first reference is RV saying he isn't going back to jail, another term for this being the wing which of course is a position on the football pitch. One of the best players I personally have seen in that position is Cristiano Ronaldo who famously wears the number 7 shirt and many people referring to him as CR7. This brings us nicely onto the next part of the bar where RV explains that he knows that the police want to "See R with a seven" which we can assume means he knows the police want to catch him with a weapon.

"And after my gigs they usually wana party, So I take em to the park and I get inside the nani, or its back to the villa, she creaming already. I'm far from chavy but I leave the bed messy" - Konan on Go Down South featuring Chip and Yungen

This is one of the longer football related schemes I have heard in a tune, usually each scheme is brief with a simple setup and a simple punchline. This bar however mentions not just one or two players names but actually six different players names – Giggs, Park, Nani, Villa, Xavi and Messi. Konan does very well to extend this scheme and give every players name mentioned a double meaning. For it to really make sense the whole way through it's very impressive.

"F*ck my exes f*ck the lot of 'em they want me 'cause I'm dominant. They have sex in the Spur of the moment then end up with a tot in 'em" - Eyez on London Bars

Derby's very own Eyez is one of the sickest with wordplay and double entendres. This whole track is testament to that as he rattles of places in London in a variety of different ways and is super smart with how he does it. Here he references Tottenham – whose local team is Tottenham Hotspur – and he flips it onto his exes so Tottenham becomes "tot in 'em" essentially saying that they are having sex in the spur (where the Hotspur element is added) and getting pregnant. Brilliantly executed in the track and a very witty flip of the football teams name.

We couldn't do a football bars special without a bar from the baller that is Don Strapzy. On “I’ll Do It”, Strapzy takes aim at how people have tried to push him out of certain situations; whether that's business endeavours or the football field. This bar focuses on United star Paul Pogba and his return to Old Trafford for an – at the time – world record fee after the midfield maestro previously left the club as a youngster for Juventus.

There are so many bars we could put into a football bars special as rappers put them in their tracks and freestyles left right and centre but these are just a few of our favourites. Let us know on Twitter as always who you want to see us focus on next time on Slow It Down, and let us know what your favourite football bars are as well.