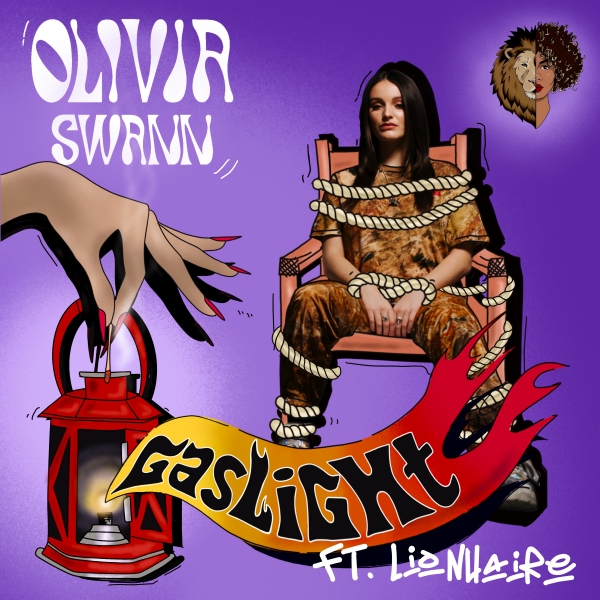 Picking apart the complexities of a toxic relationship, Olivia Swann returns with a massive summer track in the form of ‘Gaslight’.

Simmering with rich R&B vocals, reggae rhythms, layered live horns and bass licks, the single has an undeniable groove that exhibits Olivia’s ability to churn out banger after banger. Originally written as a demo for Rihanna, the London based singer-songwriter decided to take the track and twist it into a refreshingly raw insight into gaslighting and power play, with her quick-witted lyricism and abundance of attitude adding a punchy edge to the verses. “I don’t think we talk enough about the power of seduction in a relationship and how sometimes someone can use intense chemistry to blur and confuse the reality of a situation” she explains, “In my case it was finally figuring out that you’re not crazy, they are! Ultimately recognising their serious obsession with me, I wish I could have told myself to wake up!”. A collaboration with fellow UK artist and multi-instrumentalist LionHaire, whose sun-soaked authentic Reggae sounds melt perfectly into the melody, their contrasting vocals weave beautifully within one another, and with a glossy production finish from Symphony (ZAYN, Timbaland), it could just be Olivia’s best release yet.

Hinting at the chance of upcoming visuals to accompany the track, Olivia teases “I decided this one needed a music video, to really show you a glimpse of what went on with this girl…”.

Her fifth release in quick succession, Olivia has risen through the ranks in the last year, with her explosive debut ‘Salty’ being championed by 1Xtra’s DJ Target, BBC Radio 1’s Jack Saunders and Apple Music’s Rebecca Judd, as well as racking up over 55,000 views on Youtube alone and several of her songs going viral on TikTok. The Berklee College of Music graduate has a distinct style that reflects her music, using streetwear and trainers as opposed to dresses and heels to express herself. “I am an eternal tomboy,” Olivia explains. “Handbags and heels just aren’t my thing. I would constantly get mistaken for a boy as my go-to look was baggy jeans, beanies, football shirts and of course trainers at all times!”, and her defiance to adhere to the industry’s expectations is what makes her so compelling as an artist.

Counting her inspirations as Outkast, Erykah Badu, Chet Baker and Amy Winehouse, Olivia’s aesthetic is brimming with a wild variety of genres that has led her to her unique sound. Having been mentored by Grammy award-winning producers and songwriters such as James Fauntleroy (Kendrick Lamar, Frank Ocean) and Rance Dopson (Roddy Rich, Ella Mai) and working with the likes of Rico Love (Beyonce, Usher), Olivia has perfected her artistry over the years and emerged one of the most exciting newcomers on the scene.