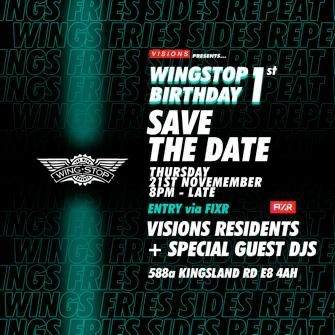 Wingstop UK has announced it’ll be joining forces with Visions Video Bar in Dalston, to celebrate its first birthday on the 21st of November - 8 till late.

The world-famous wing chain, since its launch last year, has always had collaboration at its core, and with its latest opening just seconds from the iconic video bar - it was the right time to bring together its world-famous chicken, with local talent.

The video bar has become one of the most recognisable nightlife spots in Dalston, having hosted the likes of Skepta, Virgil Abloh and Asap Rocky as both guests and performers.

Guests who attend the event can expect Visions Resident DJ’s, as well some secret special guests - the full line up will be announced in the coming weeks via the Visions and Wingstop UK Instagram accounts. Wingstop UK will also be bringing its world-famous flavours to the party first come first served, so arrive early to avoid disappointment.

Tickets for the event can be bought from the ticket vendor FIXR.