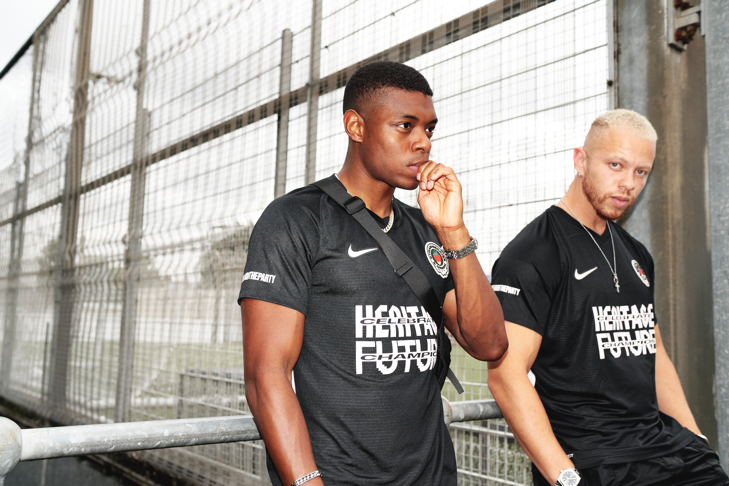 The UK’s tastiest festival is back for a full-weekend of music and youth culture across Hip-Hop, R&B, Afrobeats, Dancehall, House and Drum & Bass in September with huge artists including the likes of Burna Boy, Bugzy Malone, Koffee, Honey Dijon, Pa Salieu and so many more. To mark the occasion Strawberries & Creem have collaborated with the world’s largest online football store Pro:Direct Soccer to release a new must have football jersey from one of the fastest growing music festivals in the country.

Having football back with fans in stadiums and music events going ahead at full capacity is the highlight of this year by far. To celebrate that, Strawberries & Creem Festival and Pro:Direct have teamed up to create a football jersey that champions the future as well as heritage. The jersey, born from the pandemic era, highlights the importance of nurturing and supporting young people from all backgrounds. It’s a message that feels even more important following the abuse young England players received online after the EURO Final defeat, which further confirmed the work that still needs to be done and how we must all continue to push to celebrate heritage, rather than let it create a divide.

Speaking on the concept behind the jersey as well as the jersey itself, Strawberries & Creem Co-Founder Preye Crooks says:

"Celebrating heritage and championing future are values that run right through the very core of everything we do at Strawberries & Creem...We wanted to represent this on our official merchandise, and Pro Direct were able to bring this to life in a stylized and impactful way. We’re delighted with how the shirts have turned out and can’t wait to see them all over the site at the Festival in September. Our profits will be going to the Young Urban Arts Foundation too, reinstating our desires to nurture and support young people from all backgrounds."

Putting their own twist on a thriving jersey culture scene that continues to merge the worlds of football and music, the shirt ties in perfectly with the festival’s tagline ‘Celebrate Heritage. Champion Future’ which is branded across the front of the design. This tagline has become so much more for the founders and everyone involved at Strawberries & Creem than just their love of music but it is also all about being proud of who you are and where you come from.

Jerseys are available online from 11th August 2021 and you can purchase yours right here https://www.prodirectsoccer.com/p/strawberries-creem-celebrate-heritage-champion-future-21-shirt-black-white-mens-replica-251915/