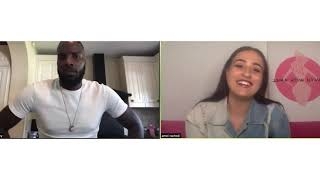 Lawrence Okolie is the next guest to sit down with Amel Rachedi on this weeks episode of 'Brunch With Amel'.

Brunch With Amel is growing from strength to strength with every coming episode and this is no different. This week Amel is joined by the current WBO Cruiserweight Champion Lawrence Okolie. Throughout the episode they cover topics such as Lawrence's journey from working in a McDonalds to becoming a World champion, his music career which is taking off and a big question fans really want to know the answer to - would Lawrence Okolie vs Anthony Joshua ever happen?

Amel really gets into the topics with Lawrence and if you have watched interviews with Lawrence before then you will know that he is a pretty open book and a very humble guy. Seeing the pair chop it up is an interesting watch and works well as the chemistry between the two is like watching two good friends have a chat.

Be sure to catch the episode below!