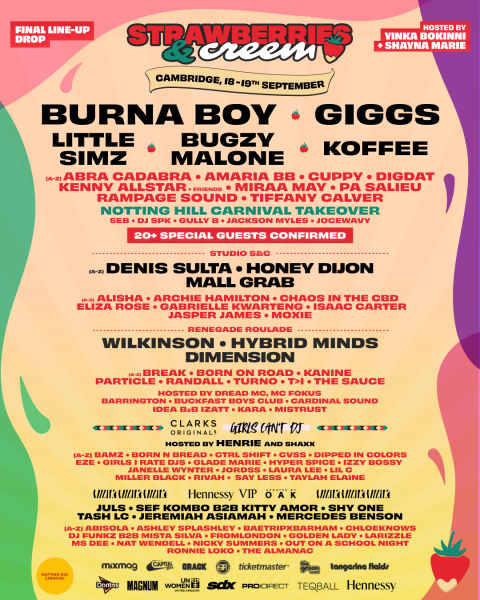 Strawberries and Creem Festival have made their final line-up announcement before the festival kicks off in just three weeks.

With huge names like Burna Boy, Hybrid Minds, Abra Cadabra, Koffee and so many more already on the line-up, you wondered how Stawberries and Creem could make the festival any better, right? Well their latest announcement sees The Landlord himself, Giggs, headlining the sunday with other artists like the legendary Little Simz, drum and bass DJ Particle and many more joining the party in September.

Along with all the new acts joining the line-up Strawberries and Creem have also linked up with Notting Hill Carnival for a very special takeover. With carnival being called off this year, Strawberries and Creem took it upon themselves to link up with Notting Hill Carnival to supply those Carnival vibes we have all been missing this year with everything Carnival is all about: colourful costumed masqueraders, steel drum bands, DJ's and a very special Soca artist all playing a part in giving that Carnival atmosphere.

Preye Crooks, co-founder of Strawberries & Creem, said: “As an event and institution that has been a mainstay in the lives, diaries and cultures of so many of our team and attendees, it has long been a dream of ours to work with Notting Hill Carnival. NHC and their team embody all that our ‘Celebrate Heritage’ tagline represents, and when we heard the sad news of their postponement this year, we felt there would be no better way than to celebrate the influence NHC has had on all of us than by collaborating with them. We’re absolutely delighted this year to be bringing the Carnival flavour and spirit to Cambridge, and it will beautifully accompany many of the Caribbean artists already playing at the festival, such as Koffee. It’s a festival first and something we are incredibly excited about.”

Much-loved Capital XTRA presenters Yinka Bokinni and Shayna Marie will take the mic on the main stage to host the hottest weekend of music. Over 20 special guests will be joining the line-up – with previous guest appearances including Aitch, Skepta, Ms Banks and Young T & Bugsey. In association with Hennessy, S&C are also holding a very special VIP party in the stunning Orchard area of the site – with Afrobeats legend Juls, African House pioneer DJ and producer Sef Kombo, London’s most versatile DJ Shy One, and BBC 1XTRA’s Jeremiah Asiamah bringing the high energy riddims to hype you up for the weekend.

There are still tickets available but they are running out quick so head here to make sure you don't miss out. It is set to be the party of the summer.