Album Review: @PotterPayper's 'Thanks For Waiting' 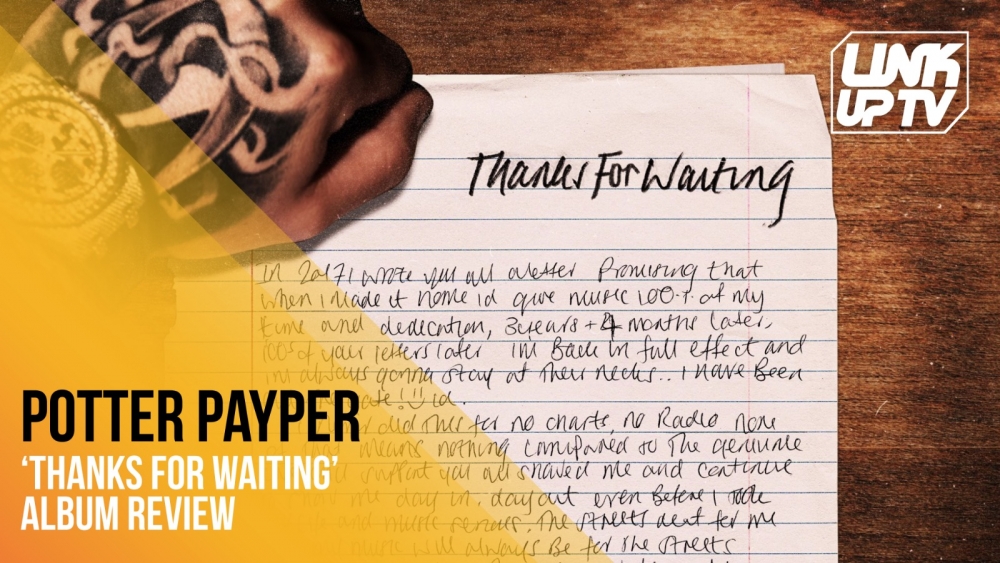 Potter Payper is back with a brand new album titled 'Thanks For Waiting'. The title of the album is in reference to a letter that Potter Payper wrote to his supporters back in 2017. Since coming out of prison and releasing his album 'Training Day 3' it is clear to see why Potter Payper has been on an ever increasing rise in popularity and positive praise from fans, critics and peers alike.

When you hear Potter Payper release new music you know what topics and themes you are expecting to hear almost straight away with real stories, raw, vivid imagery of a life that some of us will never fully understand beyond what we hear about in music or see on television or in movies. One thing Potter Payper has always done incredibly well, and showcases once again on this album, is the fact that he is able to paint a picture with his words and make you really be able to understand a lifestyle that you have never come close to experiencing, almost as if you had lived it.

The vivid imagery along with Potter's unique, raw and gritty style of delivery and flow are a perfect combination when put together on a track because it is engaging for the listener. He rarely - if ever - overcomplicates things with his flow patterns, sometimes it may even resemble a spoken word style kind of flow which - for this kind of content - works perfectly because the authenticity shines through as it feels like you are being read a book of memoirs from somebody who has been through all sorts of things unimaginable to the vast majority.

Another thing Potter has done well on this album is choose his features well. We are often used to seeing project with no feature artists, but this project has a solid number of features, and they all make perfect sense being on this album as they have similar stories to tell, the beat selection on each track suits Potter as well as the features down to the ground for example on the second track 'Eastender' featuring Unknown T the beat is a slightly darker beat filled out with syncopated hi-hats and hard-hitting basslines which we all know suit Unknown T's unique voice and flow better than anyones. Another example is on 'Catch Up' featuring M Huncho who is best known for creating wavy bangers, and the acoustic elements of this beat work perfectly for M Huncho's style.

The standout track on the project for me is 'Johnny On The Spot' because it showcases everything that Potter Payper does so perfectly. The storytelling element to it is excellent, the honesty and vulnerability of the topics he is talking about on this track appeal to me as a listener because it is authentic and his tone of voice makes it sound all that more raw and real. Dropping gems mixed with real street talk, this track is one of those tracks that you just can not help but put on repeat.

The album is exactly what you would want to hear from a Potter Payper project, with all sorts of stories to tell, gems that he has learnt across what can be called an eventful life dropped all throughout the project, features that fit just right on the project, good beat selection, and all that street talk we love to hear from Potter Payper.