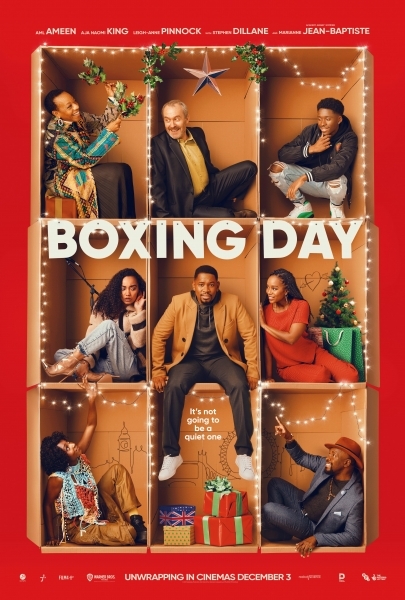 We’ve all watched Aml Ameen grow up; the British actor who caught our attention with several iconic films (Kidulthood, The Maze Runner, Yardie) returns to our screens with new film Boxing day featuring an all-black cast.

Aml Ameen’s latest project, Boxing Day, is pivotal for all of us. First being Ameen’s directorial debut - distributed by Warner Bros and Produced by Film 4. The film embraces culture, love, and change in the most honest comedic way.

The film documents Melvin (Aml Ameen), a British author living in America, returning back to London for the holidays to introduce his fiance Lisa (Aja Naomi King).

How does it feel to be a director and an actor?
Aml Ameen: It feels amazing to be directing at this level, where Warner Brothers are distributing the film, and you have some of the best film-makers in the country getting behind your vision. For me, it feels incredibly inspiring and encouraging, and I am very happy about that. It has been a journey - trying to make a film that is different for the culture. A film that is reflective of our culture but adding to who we are as Black British people. I think this is an aspect represented really well in the movie, like Kidulthood, but I just wanted to add the jokes, joy, laughter, love, the celebration of life and heartbreak. We have never done all those things yet, so this is a historic moment in British cinema history.

If you could sum up Boxing day in three words? How would you describe it?
Beautiful, Black and opulent

The casting for the movie is sick; how important was it for you to have a predominately black cast, and what did it mean to you?
It meant everything to me; the foundation of the story is about family and my family. The film is from the diary of my life—some of these stories I have experienced personally or reimagined experiences. From the famous girlfriend, the American fiance, the parents getting divorced, all these different aspects have some brevity to my life. It was crucial to reflect on that from a personal and honest place first. Afterwards, creating the magic that is us as British Black people. I capture African, Caribbean, African-American, and Black-British culture in one film. The conversation about everyone’s culture is also reflected; it is one of the first British films to do this. I am from Jamacia and Vincentia, but I also have a Nigerian family and White family. Putting specific jokes in there was reflective of my family’s table. There are so many cultural things there, so they can connect with it when people watch it. Like on Christmas, you may listen to Christmas songs, but you may also listen to Vybz Kartel - Clarks. Also, having a dope black female cast means everything to me; I come from a matriarchal home. One of the compliments of the script is that the female characters are written really well. I have observed this from my sister and mother.

The film has many eye-capturing scenery and culture; how did growing up in London influence the movie?
I have not lived in London properly for a decade. So I go back and forth between London and America. Not living here then coming back, you get so fascinated - you see London through the tourists’ eyes and seeing Black people in Southbank, Kensington, and North London. I wanted Black people to move through every place, whether it is the barbershop, Soho, the fancy hotel or the estates. This is why location became so important.

Now that you’ve left London, how do you think it influenced the film? And do you think Black British culture has changed since you left?
It influenced the film heavily because Melvin comes back to England, having been out of England for a while and living in L.A. It is part of the fun of him being back. I spent a lot of time in both places, so it was kind of like an oscillation. It was reflective of my day-to-day life regarding how Black British culture has moved in England. I think it is so dope we are the epicentre; for example, Wizkid has a concert coming up that sold out in three days. I know Wizkid is African, but London is the launching pad for these artists; I am so proud and happy to be from London. Since I lived away for 10 years, I have been telling people about different artists I love. I am very proud of everyone.

How is Boxing Day different from your other roles?
I think it is different because it’s the closest version people would have seen to who Aml really is. In the script, the role of Melvin is an aspect of me but not the entire image of me. If you listen to the words of the script, it has a deeper meaning. The first time watching the film, you will just enjoy it - but if you watch it the second time, if you like Aml as an actor, you hear how I think or some of the thoughts on my mind. There is a great conversation between the mother and her new boyfriend; he is a white man. She talks about what it was like growing up in the 80s with children and wanting them to have pride in who they are but also love for everybody. There are moments in Boxing day that speak to my mind and perspective. It is so raw and honest to me, Aml. You get to understand who I am because usually, there is a level of distance compared to my other roles. The film captures multi-generational love. It shows many young black boys being articulate and very romantic but not losing the recognisable bit of culture.

What was your favourite scene to create?
Good question, many - I will give you my favourite and the most fun. Look out for Vybz Kartel’s song Clarks, that is the fun scene, and my favourite was the Jazz scene.

Boxing day is out in cinemas on December 3rd.