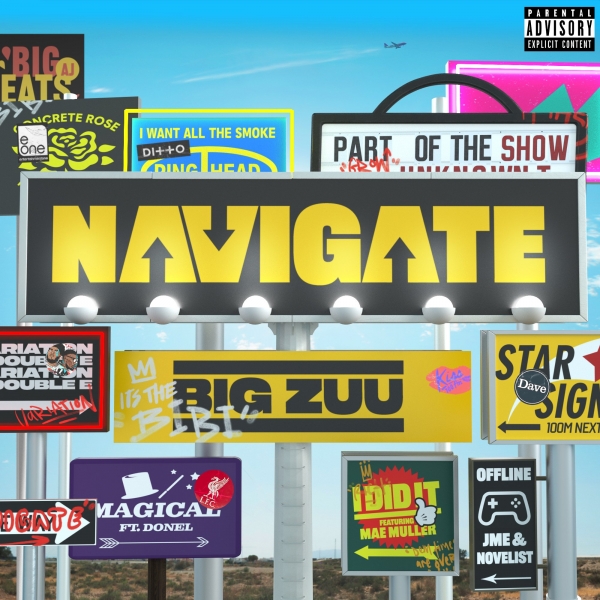 It has been a long time coming, but today Big Zuu finally releases his debut album 'Navigate'

Zuu has had a busy year, from his show 'Big Zuu's Big Eats' which had its second series this year, to the release of his cookbook, to BAFTA Nominations, Broadcast Digital awards win and a new BBC3 show coming soon. But Zuu’s first love is music, and he has been prepping the release of his debut album with the release of singles, mixtapes, radio sets, and EPs over the year.

Wherever Zuu seems to pop up, he exudes positivity. Before music, Zuu was studying youth work at Goldsmiths, and this passion in wanting to empower the youth permeates in his music. Title track ‘Navigate’ with a cinematic beat from Owen Cutts, features an empowering message of putting in the work and not letting anyone tear you down, with Zuu providing a powerful sung chorus. ‘I Did It’ with Mae Muller sees Zuu celebrating his own successes, in the process creating an anthem for everyone who has made it in life. ‘Stand Up Tall’ with some crazy production from Scene is about having confidence in yourself. And ‘Concrete Rose’ featuring Kojey Radical takes the concept made famous by Tupac “The Rose that Grew from Concrete” that no matter the circumstances, you can make it. I have always thought that Big Zuu was the artist that the youth need to hear, there’s a sincerity in Zuu’s music that really comes through, he seems like he has a genuine concern for his listeners and the youth in particular. And we need that. Because Zuu doesn’t come across preachy or judgemental, instead he is a relatable voice, he came from the same place as those to who he is speaking to.

Zuu of course made his name in the grime scene, and he continues to be a proud ambassador for it. On ‘Variation; he links up with grime legend D Double E for a Sir Spyro and Joker produced track perfect for some flexing. And on ‘Don’t Get Emotional’ teaming with Crafty 893 and Tre Mission for a song which had me skanking in the kitchen while I made my wife’s tea. And for ‘Offline’ he brings in Novelist and JME to provide the classic grime sound over a Sir Spyro production.

The production on the album deserves attention. Apart from the aforementioned tracks, the AJ Tracey featuring ‘Big Eats,’ produced by Nyge, gives me the feeling of driving through LA or Miami with the top down, catching a bit of breeze. The Crafty 893 produced ‘Part of the Show’ sounds like a grime version of the best anime theme or video game song, giving Zuu and Unknown T the perfect to shell down the track. Crafty 893 also provides production on 'PINGHEAD' which sounds like it would be perfect to be performed at a festival, Zuu going crazy on stage while the crowd sing along.

It is amazing to see Zuu's success, and this album feels like a celebration of that. It has been a long time coming and in my opinion, Zuu lives up to the anticipation, producing a cohesive project that is sure to continue to be in the rotation. Zuu has a message that deserves to be heard and whether it’s music, TV, or books, he is going to get it across and continue to be a force for good for years to come.