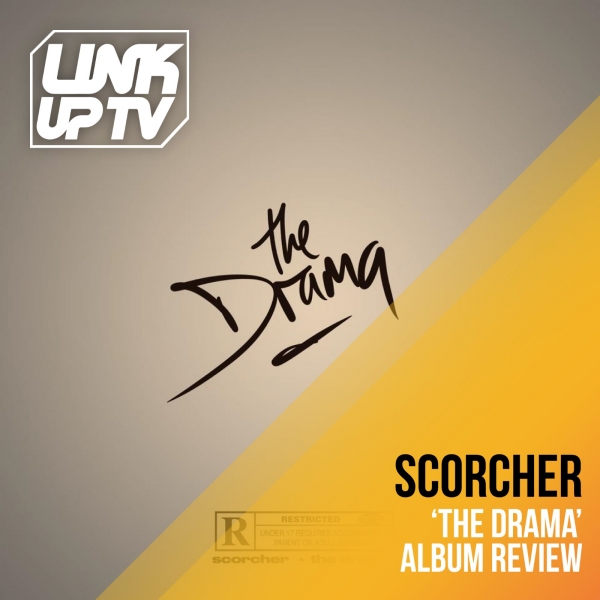 One of the veterans of the Grime scene, Scorcher, is back with a brand new album to ignite the scene with something fresh, and in my opinion much needed. Having previously been a part of the legendary Grime collective 'The Movement' - alongside Ghetts, Wretch 32, Devlin and Mercston - Scorcher is back to show why he is such a highly respected veteran in the UK scene. Titled 'The Drama', the project sees Scorcher back in his Grime bag, but also showcasing his versatility as an artist as he delivers across a multitude of genres on the project. On this project Scorcher showcases not only why his name holds so much weight in the Grime scene, but also proves that he is here to stay.

The intro track is a hard-hitting, impactful introduction to the album, as Scorcher goes in with venom over a dark, sort of eerie, drill beat and delivers his bars throughout the whole track with real conviction, and addresses a range of topics including his longevity in the game and his knowledge about goings-on in the scene, as well as very briefly touching on his thoughts on the scene.

Throughout the album it is clear to see that whilst he may not have been consistently making music year in, year out, he has clearly been keeping his ears to the streets, as some of the features he has called upon for this project are spot on for the types of tracks he has got them on. With huge names like D Double E, Tion Wayne and Akelle featuring, but also some up and coming artists that are killing it such as Ay Em, Tizzy, Nile Ezra, Ramslie, Moelogo, Scott Bundi and more, he has really paid attention to detail on who would work on this project along with his style, whilst also adding their own flavours to their respective tracks.

One thing that stands out on this project is Scorcher’s ability to jump on any type of sound. From drill tracks like ‘Ops’ featuring Tion Wayne, to Grime tracks like ‘Jurgen’ featuring D Double E and ‘Frenemies’ featuring Izzie Gibbs and Chaos, to tunes with more of a summer vibe such as 'Recall' featuring Akelle and even the more melodic ‘ZAYTOVEN’ featuring Tizzy. The way Scorcher is able to turn his hand at any type of track whilst maintaining his signature style and sound is commendable, as not everybody is able to make that work as well as this.

From his days in ‘The Movement’ up to now, one thing that you can not argue is that Scorcher has done an excellent job at maintaining his original fan base, whilst also appealing to the newer generation of fans - something that not everybody has been able to do. This alone is shown on this project ten-fold and with the energy and tone used by Scorcher across the album, it really feels like this is just the beginning of a more hungry, determined and revitalised Scorcher and we can not wait to see what the future holds for Scorcher.

‘The Drama’ is available to buy and stream right now from all good retailers and streaming services so go and support the legend that is Scorcher, this project has something for everyone and is sure to be added to plenty of your playlists straight away.