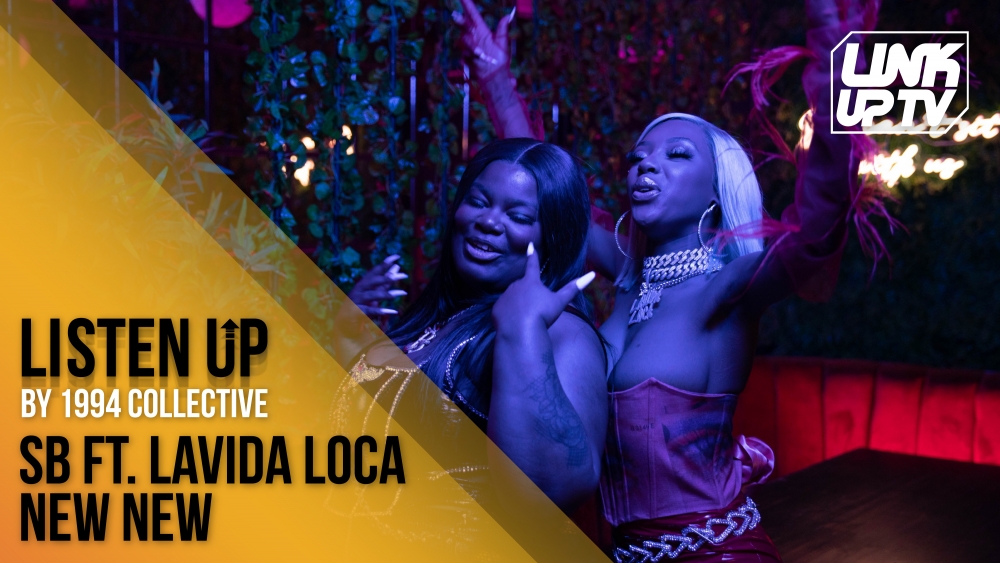 North London based rising talent SB teams up with Lavida Loca for their joint collaboration 'New New'. I caught up with them both to speak about the link up and more...

Your latest drop ‘New New’ is a female force to be reckoned with - the link up between you and Lavida is a hit! How did the collaboration come about?

SB: Lav reached out to me to take part in the ‘Succession Freestyle’ (Mixtape Madness) and the rest is history as they say! ‘New New’ was recorded ages ago but I hated my second verse and felt that Lavida would be a great fit for it. I sent her the song and she rang me at like 3 or 4am, rapped her verse to me and I lost my mind!!

What was the most fun part about the recording process?

Lavida Loca: The most fun part of the recording process was the beat - the beat is so cold so shout out Monxrchy and .Nathan.! I love it when I can just close my eyes and create melodies and flows in my head - for me that means it’s a good beat!

So I have to ask…the video caused some pretty hilarious uproar on socials…care to elaborate?…

SB: Men have such fragile egos don’t you think?! Nothing I said in ‘New New’ is cap but hey - whatever helps these guys sleep at night I guess! Theres nothing wrong with being treated like a “bad b” sometimes!

Lavida Loca: In my opinion, all males have an ego that they can’t bare to see women crush, and that’s why women have been suppressed and made to feel inferior. Now women are being encouraged to be independent and shine as women do - we can be bosses and I guess as it’s still new territory and touchy grounds for men, some of them don’t know how to handle it. F*** them though - we’re here, we’re live and strong women are dominating! They hate to see us glorify it, but it’s about time they get used to it. Like SB said “I can put him on!!!”, if he lets me that is…

Speaking of the visuals, I love the l vibe and aesthetic - it’s so powerful to see two talented, hungry women looking so sexy and classy - what was the inspiration for the styling and overall concept?

SB: The brief was literally “two ghetto fabulous boss babes”! Getting everything sorted for the video was done with such short notice and ‘Minni Wardrodbe Bandit’ (@minniwardrobebandit) done an AMAZING job styling us. I just really wanted the look of the video to still be true to us and our personalities but also clean and simple. That was definitely my favourite shoot so far - I kept telling everyone who would listen that day that I felt like a superstar!

Real rap is often both championed and dominated by men - what’s been your experience as females spitting what you’re spitting in such a male dominated scene?

SB: Male dominated spaces aren’t new to me so I'm not phased by it at all. I’m very confident in myself and my ability so to care about who doesn’t mess with me is a waste of my time and energy. I’ve had mixed experiences to be honest but more-so positive ones. The only negative comments from the public I really get is that I don’t write my own s*** or that I’m fat - they never say I’m s*** or ugly cos that’s lies!! The men within the scene show me love and I’m a fan of a lot of them so it does feel good to have their support. I just wish the industry was a place where a male co-sign wasn’t need for people to take you in; talent is talent regardless of gender and I can really hold my own and go toe to toe with the best of them. I feel like I’m creating my own space and I just want the women that come from where I come from to feel represented and not forgotten.

Lavida Loca: In my experience so far, spitting what I’m spitting has shown me that some men f*** with it, and some don’t - and I personally don’t care about who doesn’t! I appreciate those that do; as you said real rap is championed and dominated by the men therefore male co-signs are important. This is evident in the history of female Rap: Nicki and Lil Wayne, Lil Kim and Biggie, Cardi and Migos etc - a lot of men are so ignorant they won’t take in a female until a man they respect publicly shows that he does, that’s just the way it goes. In America males are more open to supporting female rappers, in the UK not so much. For me personally, I big up the rappers that HAVE supported me, such as Loski, CS, Tiny Boost, Youngs Teflon and DigDat who have all hailed me up. I respect those n****s that have shown real love, and I bite my tongue towards those that haven’t. I know the heights I’m going to reach and people have no pride - they do the double back and it’s sad to see because I’m the b**** that really doesn’t let you back in.

Lavida Loca: My favourite thing about SB is her pen - she’s so lyrically cold and that’s what I fell in love with. That plus her authenticity and her realness - no cap rap out here!

And SB, what’s your favourite thing about Lavida?

SB: Her rawness and clean heart. Before I ever met her I saw one of her viral freestyle videos and I was sold - instant fan! Then fast forward a year, she reached out and put me on to an opportunity that she didn’t have to - things like that really make me respect you as a person.

SB, a little birdie told me that you’re dropping an EP real soon?!…Tell us more!

Yes! It’s called ‘Off Licence’ - it’s in celebration of me finally being “off licence” and the feeling of freedom that comes with it. It’s a 6-track EP with a bit of everything for everyone. Theres proper heartfelt rap on there, a “get lit” song and theres even a love song on there, too!

How are you planning to enter the new year as both in your career and personal life?

SB: Career wise I’m entering the new year with the motto “all gas no breaks” - you have to start how you mean to go on. As for my personal life, I had to re-evaluate some peoples positions within my life and my position within theirs - if I felt like we weren’t adding value to each other, ties had to get cut.

Lavida Loca: I plan to enter the new year hungry! For both my career and personal life. I’m hungry for elevation! 2021 has been an amazing year for me, but 2022 is gonna be even greater with even bigger blessings because I’m HUNGRY! More money, more hits!

If you could sum up how you’re predicting 2022 will be for you in one word, what would it be?

Check out the video for 'New New.' below and be sure to connect with SB and Lavida Loca on Instagram @sb2times @kinglavidaloca