HomeNewsMental Health Awareness Week: Welcome On Board the Bipolar Express

We are living through unprecedented times where it seems our attention is captured only for the moment - long enough to acknowledge, but not enough to really take in what’s going on around us.

In an era where we have endured global pandemics, government scandals, economic upheaval and more recently, witnessing conflicts taking place all over the world, it is easy to forget that there are some battles much closer to home. According to mind.org.uk, 1 in 4 people will experience a mental health problem of some kind each year in England.

Conversations about our well-being and individual mental health are more timely than ever and it was therefore extremely refreshing to have an in-depth, honest and at times emotional conversation, with veteran musical director and producer, ProducerWez. 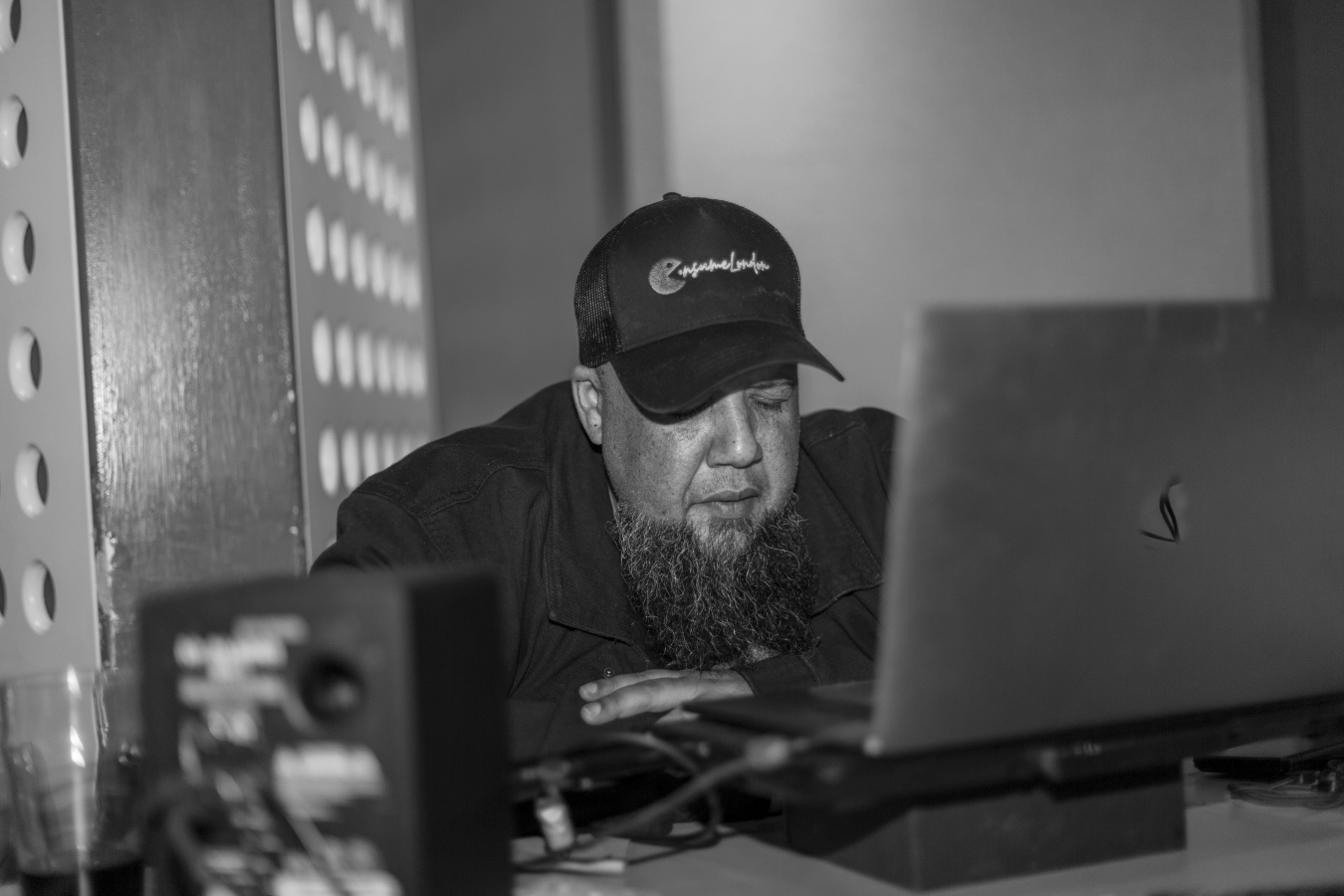 Tell us about your early years in music?

I really started taking music seriously in secondary school. I joined a gospel choir, playing guitar, before that I was into Indie music. I left college to go on tour with London Community Gospel Choir as a roadie. Being on tour with them, I saw every night, these people just go on stage and take everyone in the audience to a special place and I fell in love with that ability.

After finding his feet in Gospel, working in live music and learning his craft, ProducerWez’s musical awakening led him to amassing a host of credits across multiple genres. A career spanning over 30 years has seen him collaborate with pioneers of the UK scene (Tinie Tempah, Giggs, Naughty Boy, Emeli Sande) whilst more recently, global superstars such as, Wizkid, Zayn Malik, Stormzy and D Block Europe. Wez is well-positioned to discuss both the highs and lows of success but more importantly, shed light on the healing power of music.

In such a fast paced industry, at a time where terms such a “self-care” were foreign, first-hand experience of addiction, anxiety and manic depression eventually overwhelmed him.

It sounds like it was a bit of a whirlwind, what was your experience like at that time?

We were part of a time where things changed, commercial success in rap was emerging. It was an exciting time, it was super dope, but super hectic. We pushed ourselves and it was super intense. There wasn’t a lot of time at home outside of touring. At the time I loved it, but everything has its time and things get sacrificed along the way. Back then, if I wasn’t working everyday, at flat out speed, I felt like I was failing. I began to not take care of myself. A lot of it became blurry.

With working so much the anxiety started to kick in. At the start it was more the pressure of the job that made me anxious. It made sense, it was in context, we were about to go live in front of millions of people on TV, so of course you’re going to feel it. But waking up in the morning and feeling anxious for no reason at all, is where it starts to feel like, what’s wrong with me? What’s going on? Back then I didn’t even have the words to be able to say “my anxiety is on a mad one today, I physically can’t get out of the house” so I would just internalise it.

Before you know it, you don’t even know you’re depressed. You’re asking why haven’t I been able to get out of bed for five days? Why am I in this state? Obviously there was stuff going on in my life, I was dealing with grief, so yeah I was sad, but I didn’t know it or what I was going through. The solitude, the lack of energy, the darkness, the pressure, insomnia.

I got to a very dark place, things were out of control. I got to the bit that people often talk about, the rock bottom. Internally I hadn’t worked out how to live like this. Years worth of highs that I missed out on by being stuck in depression hit me all at once. I had a psychotic episode and lost touch with our shared reality. I was lost in the story that was in my own mind. And then I ended up in hospital.

Wez’s demons and destructive coping mechanisms saw him exchange a period of extremely intense lows, to equally intense highs that ultimately he was ill-equipped to deal with. Unfortunately, at this juncture he was admitted to hospital.

Yet from the ashes of these personal struggles, he has managed to birth a new artist expression, Bipolar Express. Originally the concept came from a desire to showcase his eclectic tastes and diverse abilities as a producer. However, the past 7 years developing the self-titled project has seen a journey mirror that of his mental health.

Extensive research into practical methods of coping with mental health led Wez, (now known as Bipolar Express) to stumble across Sound Healing which in turn allowed him to rediscover how music can be used as a tool to support calmness, peace of mind, balance and concentration. With a foundation in production and live instruments, Bipolar Express went through a process of identifying frequencies that can be utilised to experience “the real transformative power of music for mental health”.

How did you begin to cope with your mental health after coming out of hospital?

Now I practice my mental health. By that I mean I practice it much like I would an instrument.

At a time when I was really struggling with insomnia, out of desperation I clicked on YouTube on a video that said “sleep video, play this to help you sleep”. One came up with a frequency, which initially I was thinking “sick” just because it was familiar to me. I had the best night’s sleep in a long time. The quality of the sleep was so good, the next day I needed to find out what this stuff was and why it was helping me so much.

I delved more into Sound Therapy and studies about how it can help people with addiction and something specifically called Binaural Beats. At the time it hadn’t been rolled out properly but there was enough information for me to start creating it myself and trying it out. It wasn’t like a cure, but I was able to start feeling like I had something to help me with this battle with addiction and mental health. I started to find the science behind Sound Therapy and understand the help it gave me and the benefits and it really supported my recovery. Being able to just sit and listen was actually helping me. I didn’t all of a sudden have to become the best at meditation or anything like that. That all helps too and can come later in the journey with practice, but with this - all I had to do was listen.

For me understanding music has allowed me to understand language and bigger concepts. Music is a universal language. We can talk about our self-care in the same way we talk about practicing instruments, learning a new instrument. Literal practice. Doing the same thing repetitively and over time seeing progression and change. With music, understanding frequencies, understanding balance, high and low frequencies and the effect that this can have on a person, your mood, your calmness your inner balance.

It was fascinating to hear the intricacies and results of Bipolar’s findings. He had come full circle and managed to access a means of creating music that scientifically mimicked the highs and lows one can experience in terms of their mood, feelings and thoughts. This was then taken to the next level to curate a body of work which applied this sonical approach, carefully selecting the right frequencies which are proven to encourage calmness, improve concentration/focus and provide a sense of balance.

This journey of discovery allowed a reinvigorated Bipolar Express to set his sights on making Sound Therapy an accessible, alternative resource for others to potentially benefit from, realising its importance on his own path to recovery. He feels that it is especially of importance to those working in demanding industries such as entertainment or music where mental health issues can be more prevalent.

Would you say that Sound Therapy is one of the most accessible treatments there is?

I would say it’s the most accessible, but also the most under-utilised therapy technique that there is. For me, I struggled with being on waiting lists, like with certain charities - you call them in the middle of a crisis but only if you meet a certain criteria you can get help.

There was one-time I was in tears in A&E but at that time I just didn’t fit the criteria for help. Fast forward and you’re telling me that all those times I could just sit and listen to music and sounds and get some kind of relief and reprieve from this nightmare I found myself in mentally. I think it’s something that is super under-utilised. Hopefully it’s something that will be adopted by the NHS and healthcare and becomes a resource that is tapped in to.

Making this music is not difficult. The frequencies and the science is still emerging but there is enough out there for us to say “yo, let’s give this a go.” Culturally sound healing has been around as long as some other early belief systems and cultures in the world.

The englightening conversation with Bipolar Express will continue as we anticipate the release of the new project, expected in September 2022. His passion to help others who have faced similar adversity in dealing with their mental health has seen him develop a unique roll out of immersive experiences coined, “Magic Moments” to truly showcase the therapeutic function of sound and how it can even enhance or mute our sense of taste with food and drink. This will coincide with an event series which combine Sound Baths and Binaural beats, blending sound healing with popular genres.

We’re excited to SEE, HEAR and FEEL how this body of work will be received and potentially trailblaze a new approach to well-being and positive mental health.

Stay tuned for the next part of the conversation which digs deeper into the creative process and more insight to the tracklisting, closer to launch in September. You can keep up to date with Bipolar Express Instagram (@thebipolarexpressofficial) and on TikTok (@thebipolarexpressmusic).