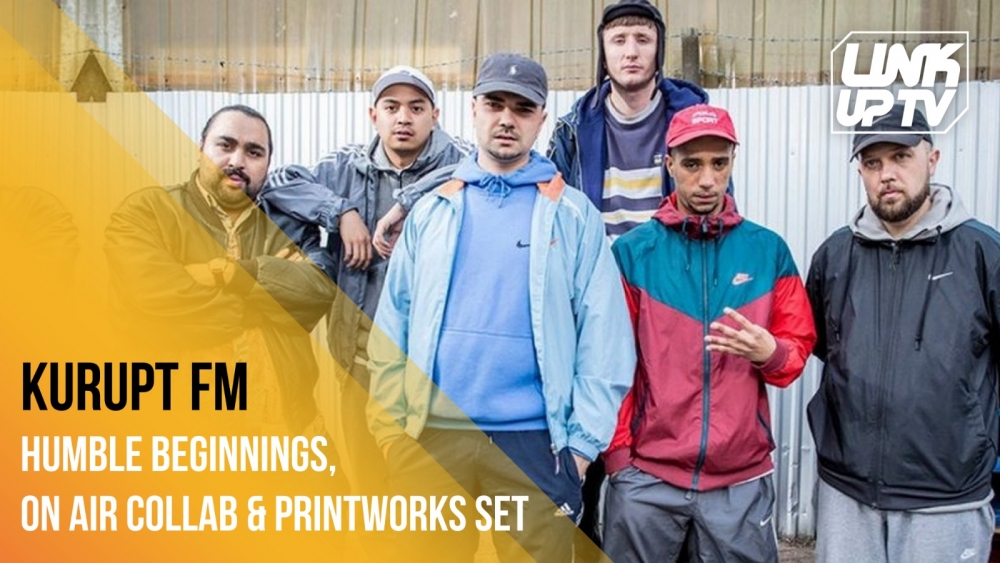 Kurupt FM have slowly but surely become a household name up and down the country - and for good reason. Allan Mustafa aka MC Grindah took some time to talk to us about some of the exciting things that the collective have been doing, as well as sharing his thoughts on some other topics and giving us some more information on their partnership with 'On Air'.

Starting out from scratch and building an audience, before getting 'People Just Do Nothing' signed onto BBC Three and becoming a massive hit, going on to win BAFTA awards, produce a whole movie - People Just Do Nothing: Big In Japan - and tour not only the country but around the world and play at some of the biggest venues and festivals the UK has to offer. The group have hit heights that they could have only dreamed of at the start of their journey. "We actually started on YouTube in 2010 so even back then we never expected any of this to be fair we didn’t look that far ahead it was more about doing the work at the time and putting stuff out there we found funny and enjoyed doing and if anyone else liked it that would be a bonus."

Kurupt FM have performed - and are set to continue performing - at some of the most prestigious festivals and venues in the UK from Reading and Leeds, to Bristol's Marble Factory, but one of their most recent performances was on their 'Greatest Hits' tour where they closed off the tour by performing at the iconic Printworks in London. "The venue was amazing, we’ve been very fortunate in our careers and have been lucky enough to see amazing venues around the world but this one felt different the scale of it is insane nothing like we’ve ever done before proper Batman sort of s**t."

This show was livestreamed and part of a collaboration with 'On Air' who have streamed performances with a huge variety of talent including Arlo Parks, Skepta, Robert Glasper, Anne-Marie and pop star HRVY’s global live stream from the Royal Albert Hall which trended Top 10 on Twitter. For this event Kurupt FM and On Air partnered with 'One Tree Planted who are a non-profit charity to make it simple for anyone to help the environment by planting trees. On Air will be planting one tree for every ticket purchased on their website for this Kurupt FM livestream. "There’s always lots of messages we have about people missing out on our live shows for various reasons so we felt this would be a perfect way of reaching a wider audience and On Air felt like the right people to do it with as they let you do your thing and have creative control over it all.

The show - performed live in front of over 3,000 people - was livestreamed and is still available on demand at the On Air website so if you did not catch it at the time, it is still available. Shows like this often take a lot of preparation and planning, and the thoughtfulness and the idea behind partnering with One Tree Planted is one that shows a sign of responsibility from people in the public eye as Kurupt FM are, as well as a want to put on an incredible performance for the fans, and making the livestream available on demand for those that could not make it is a very nice touch as well. "We’d been working on it since last august to be fair. Wanted to create a special show with moments for all of our characters that feels fresh and different to our older live shows I felt like we did that had so much jokes getting back together and touring the country Printworks felt like the perfect celebration of it all"

The tour was the groups first tour post-covid and by now the majority of fans, artists, and people behind the scenes that make these shows happen have seen the difference in the way shows are happening now. It would be fair to say that having to go without this medium of escapism for so long has made people appreciate shows, festivals, concerts a lot more. "this tour felt extra special because we felt starved of the adrenaline you get from that real human interaction with the fans at the live show, and also just getting back together as best mates felt good. Working on tv writing and acting is amazing and you get little pockets of that feeling over time but nothing compares to being out on stage and feeling that connection In real life and seeing the beads of sweat in the front row."

The livestream is STILL available to be viewed on demand via On Air and One Tree Planted are still partnered with On Air for it to plant a tree for every ticket sold so treat yourself to an incredible performance along with doing something good for the planet.