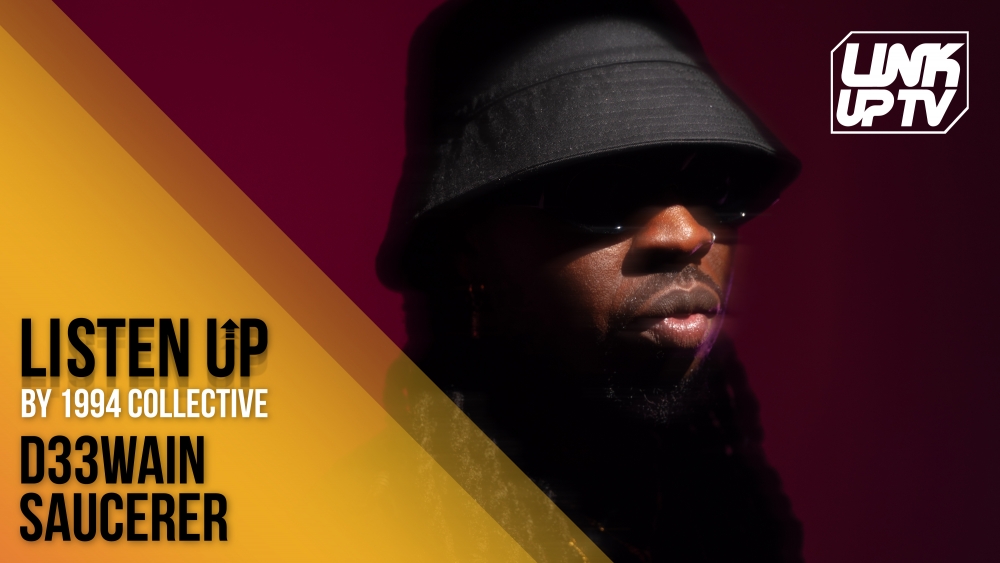 For this week's edition of 'Listen Up', I caught up with UK multi-disciplinary artist D33Wain - he shared all about his journey through the music industry as an all round performer and "saucerer supreme"...

Just a wavy, well dressed individual that’s a messenger through music and art. That’s all.

How important is “culture” when it comes to your music?

Culture is a movement that influences my music - you don’t get music without culture and black British culture is so unique that we’ve managed to start a movement because of it. Culture is very important to me because I have a different experience with it. I was born and raised in Stockwell, South London but also Gravesend, Kent. Being black (the Queens and Kings of culture) we all have a foundation or a starting point with it, but our experience within our culture is where we differ. Culture is a manifestation of where you’re from, so when it comes to my music I want people to connect with my culture and my experiences.

Like myself, it’s forever evolving and changing forms. It’s almost a time stamp of that particular part in your life. So when you hear a song of mine, you’ll be able to tell what was the culture at that time - that s*** is the foundation of my songwriting to be honest. The cultures I’ve had experiences with made me who I am, and I need that to translate into the music so the listener can get to know me. I’ll even say that culture dictates the sound of my music - it’s that powerful. It really the "DNA" of my music.

I’ve seen you cutting some shapes in your music videos - how important to you is the performance aspect of what you do?

Performance is everything to me - dance is first love. Being on stage is where I feel my most expressive and my most free. I grew up on stars like Michael Jackson, Bobby Brown, Janet Jackson and Beyonce...the list goes on. Their performances brought another element to their songs, and that’s important to me because I want to give people that same experience when they see me live. I want people to feel the energy and essence of my songs and I can only give them that through performance.

I love adding choreography to songs on stage because it gives my music another life. I’ve been told my songs sound better live and there’s definitely a reason for that. There’s certain things I can only translate and express on stage, and that human to human experience is so integral to my music! I need you to feel the emotion of the song I’m performing and there’s a frequency you won’t be able to feel just through the audio. I say that to say come...to a show of mine! I’m here to put on a show and make it worth your time - performance is everything!

I love the video for ‘Saucerer’ in particular, tell me a little bit more about the concept and inspiration behind it

I appreciate your words! Originally, I wanted to do a 'Doctor Strange' concept because he’s also called the 'Sorcerer Supreme' but that kind of budget in this UK economy as an independent artist…no chance! The concept for the video came about randomly, and was definitely inspired by Solange’s work. The theme was "less is more but the more has to be creative". The idea doesn’t have to be the biggest, but it's the execution that is key.

For example, there’s a shot were I wanted to plug my locs into speakers because I thought it would look really cool - and it did. Myself and my very talented director (@NaomiVids) built around that really. The aim was to make this video as slick and creative as possible, and execute as many creative shots as possible. Another example was how we shot with a projector to give the video different visual effects and also using the extras in the way we did. We just wanted to make art. The cool edits and visual effect you see are all Naomi - she’s a real g. Just like my performances, I want to give the viewer an experience when they watch my visuals. We also really wanted to raise the bar from my last videos - and we definitely achieved that!

I’m independent but definitely looking to build a team - a team that genuinely cares about the vision and that can take me all the way to the top. I truly believe that will happen, but it’s all in God's timing. I’m sure I’ll have my avengers roster soon...

I don’t know if I’ve had that moment yet. I’ve definitely had highlights, like being a resident artist at Camden Roundhouse was dope! Opening up for Chip was wavy, but I think for me I just look for signs from God that I’m doing the right thing. I’m not where I want to be yet but I know it’s coming.

I guess a personal break through moment for me was when a listener reached out and said one of the songs on my first project helped her through a lot, and even gave her the hope to better her situation. Another person reached out to me recently and called my music “higher vibrational” music - which is the best compliment I’ve ever received, too.

For me, those comments mean a lot because as writers we tend to think we’re the best, but when people confirm or believe in what you believe in, you can breathe and say “believe in yourself because others do". From those foundations, I’ll know I’ll do a lot with this music thing - those little checkpoints are my breakthroughs.

I think we’re about it hit a golden age of UK music. There’s so much talent here is actually crazy - and it’s all different genres. I know the chart stuff is boring, but when you look we’ve got Rap, Alternative Hip-Hop, R&B, Pop, Garage...there’s so much quality. Right now I feel UK music is in a similar place to America in the 90s.

Can we expect any collabs anytime soon?

Most definitely! I’m always down to work and it’s something I want to do more of. There’s artists I want to work with but I’m yet to get into the studio with them...hopefully soon! But collaborating with Deanna Chase would be fire and Jonno AQ. There’s an artist called Thea Hallow who’s dope, too - I think that would be a vibe for sure. There's so many artists I’d love to go the studio with even if a song didn’t come of it. Just to see their creative process would be a privilege.

Share something that most people don’t know about you?

I started a Tanya Branning (from Eastenders) fan club on Facebook when I was in secondary school. I know...I was young... allow me please. Okay next question.

Abundance in opportunities, brand deals, label interest, success and a breakthrough this year - I don’t know where from but it’s all happening!

And definitely more songs, more videos and more shows. God willing a headline show soon, too. I just want to show the world my talent man that’s it. I know God has got the rest, but from me it's just gonna be more music and expression. I need to the streets to hear me and the people to see me! Basically, I’m saying that I’ll be outside and my music will be everywhere...