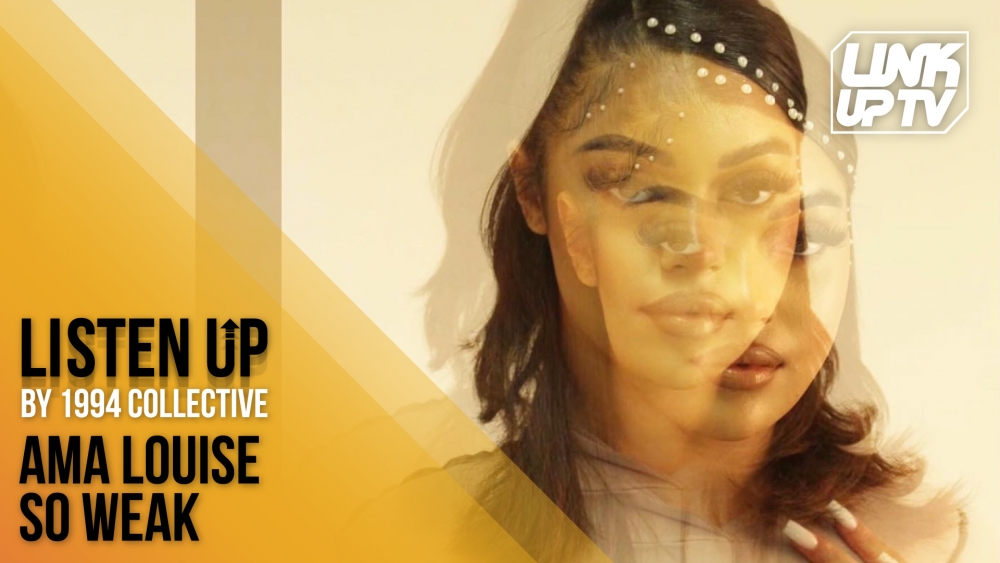 Ama Louise joins 1994 Collective's Chloe Mykel for a chat about her latest release 'So Weak' and shares visuals for her new acoustic cover of Jazmine Sullivan's 'BPW'.

Congrats on the success of your latest single 'So Weak'! How are you feeling surrounding the release?

Thank you so much! I’m buzzing about it. It’s my favourite song that I’ve released to date and I’ve received so much positive feedback and support on both the song and the video too - I’m really happy. It’s still only my third release, so I am definitely early on in my journey. but I feel like it has allowed people to understand me more as an artist and the type of music I make. To be honest, it’s just made me excited to release more songs and establish myself properly as an R&B singer.

I LOVE the video - it's definitely one of my favourites this year. What was the inspiration and how did the vision come to life?

The video took a lot of work especially as I’m an independent artist with no funding or a proper team. However, the people around me played a huge part in it to make it all come to life. I started by brainstorming ideas and because the song has a nostalgic feel I pictured a vintage car, a love story and a sunset. I then found the directors (Don Prod) through a friend and we decided to shoot it all in one day on a beach in the UK! It was a very long day, but luckily it was sunny. In the end the video came out better than I had hoped!

"UK R&B" has become a huge topic of conversation recently - how do you feel about the current UK R&B scene?

I love that we’re seeing more and more R&B being produced and brought to people's attention at the moment! Artists like Flo, JVCK JAMES, Mahalia, Tiana Blake and Mnelia are all releasing some amazing R&B. I almost feel like we shouldn’t even have to specify that its “UK” R&B because we’re not competing and it’s all high-quality music that can have global reach - we just need to be heard more! I do feel like there's a movement starting and that R&B will take over again…

What's the most important thing to you when it comes to your music?

The most important thing is that I myself would listen to it! I always want to make the type of music that I would listen to and that I love over trying to please other people. That way it feels genuine and authentic, not forced.

Do you have a process for deciding what track you want to put out next?

Because I’m still finding my feet as an artist. it's all a bit trial and error at the moment! I haven’t released a project yet, so I’m focusing on releasing singles that I think people would like and then seeing what happens next…

Who is an artist in the UK that you could see yourself collaborating with?

I could see myself collaborating with Nippa - our music has similar vibes and I think working with a male singer would be super interesting. I think our voices would go nicely together, too. I could also see myself working with a rapper - them doing a verse on one of my songs or me a verse on theirs…I’m just not entirely sure who yet.

Which female artists have inspired you on your own music journey?

So many! But Alicia Keys, Jazmine Sullivan, Destiny’s Child and Aaliyah are some of the main ones that I grew up listening to. I always appreciated how insanely talented they are from their raw vocals to production to vocal arrangements. Their music and voices are timeless and that’s what I want to achieve with my own music.

How would you describe your sound for anyone who hasn't heard your music yet?

I would say nostalgic R&B! A sound that’s reminiscent of 90s/2000s R&B with a lot of riffs, strings, harmonies etc.

What can we expect from you in the near future?

Describe 'Ama Louise' in 3 words?
Passionate, genuine and funny…I’d like to think!

Check out the visuals for Ama Louise's acoustic cover of Jazmine Sullivan's 'BPW' above!