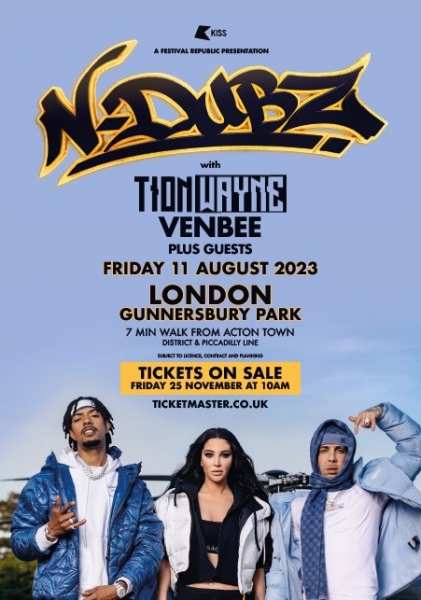 The return of N-Dubz only continues to get bigger. After the announcement of a special outdoor show at London’s Gunnersbury Park - following their momentous sold out tour and four-night run at The O2 - it has been revealed that North London superstar rapper Tion Wayne and viral drum-and-bass breakout Venbee are joining the bill on Friday 11 August 2023. This will be N-Dubz’ only hometown show next year and with such heavyweight names jumping onboard, it’s set to be the unmissable party of the summer. Tickets are on sale now via Ticketmaster.

Following news of the Drum and Bass stars's addition to the lineup, Venbee said:

“I’m so gassed to be playing on the same stage as my childhood idols. Can’t wait for the show.”

This year, N-Dubz fans were treated to news of the band’s hotly anticipated comeback. Dappy, Fazer and Tulisa quickly went on to drop a brand new track ‘Charmer’, along with a string of live arena tour dates which rapidly sold out due to overwhelming demand. The London trio rose to stardom in the noughties with hits including Number 1, ‘Ouch’ and ‘Papa Can You Hear Me’. Following their split and having pursued successful solo avenues, they’re back together to the delight of their many loyal fans and Gunnersbury Park will be an amazing homecoming London show for beloved group.

N-DUBZ LIVE 2023 dates include the following:

Tickets are on general sale now!