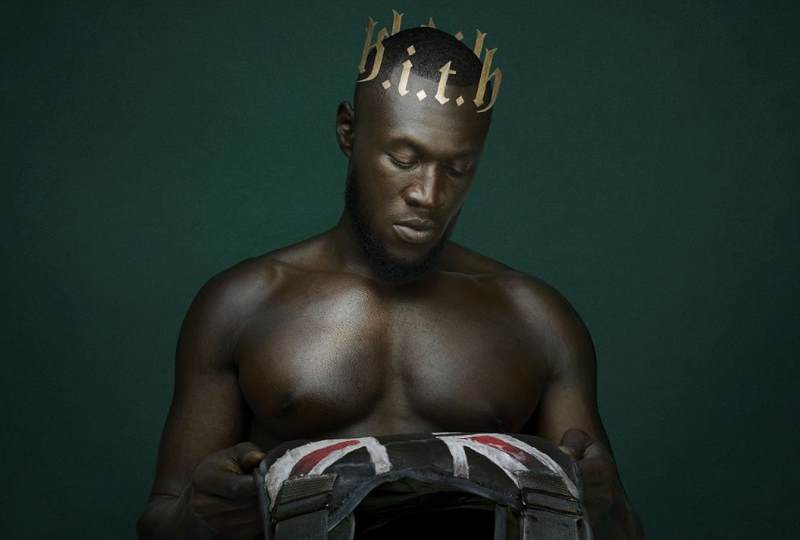 On Gang Signs and Prayer Stormzy established himself as a creative force to be reckoned with, solidifying his place amongst the royals of British music. Now on his sophomore effort ‘Heavy Is The Head’, Big Michael wrestles with the responsibility of wearing the industry’s crown and the constant questions of his own mind. The result? An impressive and varied body of work which highlights not only its hosts inner battles, but his ongoing progression as a versatile and impactful artist.

Our host wastes no time as from the jump we’re reintroduced to the same dose of energy and bravado that gave him his reputation. The opener ‘Big Michael’ serves up a healthy portion of wordplay and switching flows as he spits confidently over the progressive grandiose beat, each snare and bassline bolstering the bars flowing from his pen. The track serves as a reminder of who Stormzy is and the position he holds in the game, while setting us up nicely for the journey ahead.

Second single ‘Crown’ introduces one of the projects overarching themes, the tole of responsibility and influence on the mind of the heavyweight emcee. It also signifies the projects use of live instrumentation, as the intro draws us in with use of soft piano keys, a departure from some of the projects more grime inspired backings. With ease Stormz delivers its melodic hook, later accompanied by a seven-piece choir harmonising in a beautiful uplifting manner. It’s incredibly clear how educational the past years have been for him, and the effect that controversial takes on his creative endeavours have had. The journey of true representation for all in the arts is still in its maiden voyage, but here we are reminded how instrumental Michael has been in the fight for real change. The introduction of Merky Books and his eye for elevating emerging talent have served as landmarks for the artist over the past years and it’s apparent that while being comfortable having earned it, the crown truly does hold a lot of weight. On ‘Do Better’ we’re reminded of the work ethic that pushes the young talent to strive for greatness. Sacrifices have paved the path to success, and constant questioning of himself has only added to his desire to achieve more. Stormzy is obviously fighting many an internal battle, but faith and family have served as guiding lights during his journey to the top.

One of Stormzy’s most impressive attributes for me is his ability to bring the best out of the artists he collaborates with. ‘Audacity’ returns to the tried tested formula for which many became fans, as aggressive bass floods over haunting chimes on its gritty instrumental. Its intensity is easily matched by Mike as he pockets the beat with a healthy mix of pop culture references and challenges to the other contenders of this now saturated market. He is aware of the circle he keeps, and of the snakes circling in a ruthless business.

The track begs the question, who really has the audacity to challenge the king? Who can match these numbers and ticket sales? The answering list is sure to be short in length, and not one that many rappers from these shores could currently make. This impressive reminder of Michael’s technical skill and lyrical ability is also accompanied by a cold feature from none other than Headie One, who takes his chance to go back to back with his contemporary admirably, bringing an energetic and animated performance that only compliments the track. Likewise, on the track ‘Pop Boy’ guest feature Aitch rises to the occasion supremely, delivering a confident and playful verse with higher energy than we have typically seen. In his voice this opportunity is reflected, and he doesn’t miss the chance not only to add value to the project but elevate his own status in the game in doing so. Each feature feels thought out and showcases Stormzy’s ability to identify exciting upcoming talent well. Both Headie and Aitch have enjoyed meteoric rises to the public eye over the past months, as has Burna Boy who features on single ‘Own It’ alongside Ed Sheeran. Burna brings his signature style to the track which perhaps missed an opportunity for increased success in avoiding a summer release. The song could’ve easily appeared on Teddy’s ‘No 6’ collaborations album, but still displays Stiff Chocolate’s experimentation into the use of new sounds. It will surely be received well across the Atlantic and will help push his name on the scene far further a field.

Before hearing this album, I predicted features from a range of American hip hop artists and a likeness to the production we see stateside. I was pleasantly surprised however, to hear Stormzy delve into the world of Rhythm and Blues as much as he does here. My favourite track on the album takes the shape of a knockout collab with H.E.R which goes by the name ‘One Second’.

“I’m not the poster boy for mental health”

Again Michael details his battles with both his demons and his own mind, noting that he doesn’t always want the titles which he amasses, nor does he always feel he deserves them. He is aware that many fighting injustices every single day go unrecognised, and that despite achieving ground in the struggles he faces his journey isn’t complete. With such heavy subject matter you may expect other elements of the song to take dark shape, but the use of strings combined with H.E.R’s constant presence throughout his verses creates an almost angelic world in which the song exists. The stars appearance doesn’t feel feature like, and she is given the space to imprint her own style as she effortlessly croons over the stripped back beat. Surely this offering will raise Stormzy’s profile internationally, and leave fans expecting back to back grime beats and aggressive flows shocked yet satisfied.

“We had OG’s and preferred them to our father’s”

RnB similarly influences Tiana Major collab ‘Rainfall’ and reflective track ‘Rachael’s Little Brother’, where we see Stormz reflect on relationships with fans, his upbringing and the issues of his past life. He knows how easily his path could’ve been redirected, and aside from the insecurities he possesses seems to be enjoying life in equal measure. He never forgets the importance of his team, and his aspirations to see them also achieve their goals is one of the qualities that makes this icon such a likeable character. Pushing himself creatively again, Mike spits over various differing styles of beat throughout the albums sixteen track listing. ‘Handsome’ features distorted excerpts you might find on a Fallout game, which could easily come from an old twentieth century wireless. Whereas number one single ‘Vossi Bop’ takes more influence from the trap market of North America. He was made in Grime, but it’s impressive to see Stormzy now experimenting with so many opposing styles and not limiting himself to a single lane. The greatest artists in history have pushed their own creative boundaries, so why shouldn’t he follow suit?

Other standout tracks include ‘Wiley Flow’, a homage to the founding father of grime and ‘Superheroes’, where Stormzy speaks of the importance of strong female role models, paying tribute to others contributing significantly to the growth of Black British culture. This track is uplifting, encouraging and ultimately necessary. The most personal and vulnerable moments of the project arrive however, during penultimate track ‘Lessons’. With a low-key conversational flow Stormzy takes a long look at himself and the past mistakes he has made. After his split with long term partner Maya Jama, the artists details an understanding of the consequences of his actions, an understanding of feeling and an acceptance of the emotions he received from her. Overall? Michael just seems immensely grateful. Not only for the time they spent together, but for the lessons he learned in love.

‘Heavy Is The Head’ is a bold and impressive body of work. One which shows colossal personal and artistic growth. We see Stormzy experiment with new genres, take risks and open his heart and mind up to us, the listeners. With great confidence, delivery and notable singing ability Big Mike confirms his place as the current King of the scene. Every track feels justified and necessary to the overall balance of the album and there is always something to say. No entry feels rushed or used as filler. Fans can rejoice in the fact that with help from a formidable production team, South London’s finest has delivered another project that will keep us listening for years to come.