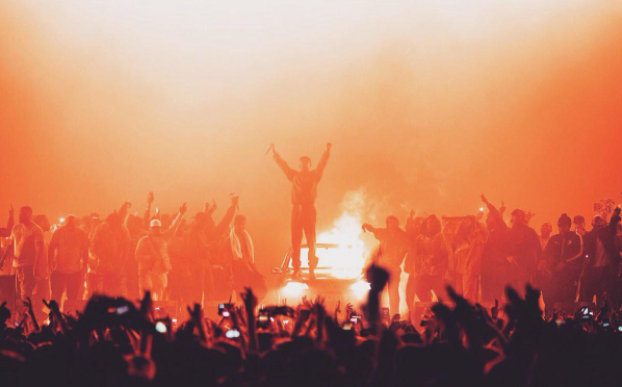 Big Smoke. It’s been quite the decade for the Tottenham hailing emcee, one where he began initially fighting to find his identity and place in British music and ended established as one of the greats. The years have displayed both huge personal and musical growth for the influential star, and he now holds the freedom to experiment and express without creative boundaries in his own hands.

I don’t want to focus too much on the career beginnings of Skepta here. We all know his standing as a pioneer of the grime genre and the work he put in throughout the early two thousand. He started out DJing for Meridian Crew but began spitting soon after and following a brief stint with the infamous Roll Deep he, of course, became a founding father of the heavyweight stable Boy Better Know. His ability to dispatch rivals and command attention with his brutal unpolished delivery immediately set him apart from the crowd, providing a huge platform of listeners from which to build from. Lord of the Mics and early album releases proved to be successes for the artist, but he would redefine himself and the levels of achievement available to a grime emcee in the years to come.

Here’s when Skepta’s disillusionment with the industry began. After signing with Island Records a stream of singles were released, ones which seemed to put the brakes on Joseph’s own personal creative output and growth as a performer. The tracks seemed generic, basically written and led by autotuned hooks trying to capitalise on radio plays and a more varied mainstream audience. It became clear that this disregard for his own opinions and talents was beginning to take a heavy toll on Smoke’s mental health and the deal was broken off at the back end of 2012. A hiatus began one which proved to be ultimately necessary.

March 2014. Skepta reappears with a cold and confident verse on Meridian Dan’s now-iconic hit ‘German Whip’. Fast forward only a few weeks and ‘That’s Not Me’ was released upon the world. An aggressive and heavy-hitting reminder of its creator’s lyrical ability and commanding presence. For the record, it still plays as well today as it did on the day of its release, whether that be through the speakers in the club or in the stereo system of your car when your cruising in the late night. An Uber driver in Los Angeles ones asked me to show him a track which summed up the ‘real sound of London’. I had consumed a fair amount of alcohol at this point let it be known and thought about playing ‘Samantha’ or ‘Man Don’t Care’. What I settled on however was this absolute classic, and windows down we rode along Hollywood Boulevard as people turned their heads and began moving to a noise signifying of only our beloved capital.

After surviving cringe-worthy industry releases, Rolex sweeps and an infamous music video (you know which one I mean), Skepta had truly returned home to his roots. No more designer labels, no more bullshit. In his black tracksuit, Big Smoke returned to the scene in a major way stamping on it his signature mark and completing his journey of self-rediscovery. In the years prior he had been sleeping on the floors of friends New York City apartments while he researched and soaked up different sounds and cultures. He returned to the game as a student with an ear to the streets, searching for his own voice and sound which he eventually found in the comfort of his home city. At a time when his sister Julie was graduating to Beats Radio and brother Jamie reminding the country of his own talent, the world was almost ready for ‘Konnichiwa’. Days after appearing with Kanye West at the Brits ‘Shutdown’ arrived. The track opens with a verbatim soundbite of close friend Drake and stands as a swaggering and self-confident relaying of Skepta’s recent achievements. He shutdown Shoreditch car park in one of the best publicity stunts the decade has seen, he shut down fashion week and performed in NY’s central park and through his Canadian counterparts championing was beginning to gain momentum as a major international star.

The album was finally released to critical acclaim and widespread celebration. Singles like ‘Man’ and ‘Ladies Hit Squad’ dominated the scene, proving that through being himself and fighting for his voice Skepta had become almost solely responsible for grime’s resurgence and projection into the mainstream of British music. Throughout the project, he speaks honestly about the events that led him to this point, the tires of his workload and his battles with being caught in creative limbo with great confidence and clarity. He speaks not only to his homegrown crowd here. The album is more accessible to the US audience than any previous grime effort but never comprises its identity in order to bend their will. The Mercury Prize rightly recognised this body of work as its recipient in 2016. Speaking on the victory Adenuga stated:

“But I really did this for people to see freedom. I want to inspire people who do other genres of music too to be: ‘Why am I with this record label? I don’t understand what they’re doing for me. They tell me what to do. When I first came in here, they told me I’d have all the freedom I could have, but now I’m in this deal, I don’t feel like myself any more, I’m getting out. Because Skepta and Boy Better Know did it.’ I want this to get into people’s heads. This is real. I’m not signed. This is independent.”

In the following years, Big Smoke has become more experimental in his approach to music. Having solidified his place in the game I feel he has now reached the point where he is able to comfortably play with new sounds and influences without the fear of commercial failure. This is a place not many artists make it to, one of luxury and reward for years of constant hard work. He appeared on ASAP Rocky’s major global hit ‘Praise Da Lord (Da Shine)’ and released the ‘Vicious’ EP which continued his collaborations. Admirably, Skepta has kept his momentum going right through until the closure of the decade with the release of his 2019 album ‘Ignorance Is Bliss’.

‘Konnichiwa’ proved Skepta to be one of the greats and in the years since its release he has opened the door for a new wave of artists in the UK scene. He called out label heads for not promoting the growth of talent from our island shores, proving the EP an effective middle finger to the higher heads of the establishment. ‘Ignorance Is Bliss’ arrived at an interesting point In Smoke’s life. He has forayed into the worlds of fashion, giving back to his local Tottenham community with the construction of youth centres and after a relationship with supermodel Naomi Campbell introduced a child into the world for the first time. This project depicts the highs of living life as a creative superstar contrasted with a man grappling the practical aspects of life as a new father. The most effective moments of the album arrive when we see him break from typical nonchalance and swagger when through the cracks Skepta opens himself up and displays a vulnerability beneath the surface. ‘Bullet From A Gun’ deals with major philosophical ideas and throwbacks to his families ancestry littered amongst takes on past relationships and flexing statements. ‘What Do You Mean?’ sees out host effortlessly flow alongside the outstanding J Hus, showcasing Skepta’s eye for new talent and knowledge of the ever-changing trending scene. The production throughout the tracklisting is tight and provides a more sensual listening experience than its predecessor. The influences of trap and garage meet grime in impressive musical fusion, a testament to Joseph’s talent behind the mic as well as in front of it. Some of his pop culture references may seem a little dated sure, but this is a minor take away from a project which follows such a bold return album and holds its own.

The album maintains Skepta’s meteoric return to prominence whilst propelling him forward into new musical landscapes. The main takeaway for me? Just how comfortable he is in his own skin; how confident he is in his own abilities and judgement. I for one can’t wait to see what comes next from a man who has truly proved himself as one of the artists of the decade.