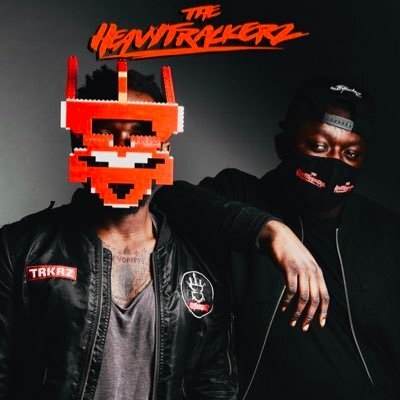 The HeavyTrackerz are arguably best known for working with the likes of Stormzy, Dizzee Rascal and Meridian Dan in the past. Singles like ‘Not That Deep’, ‘Nutcrackerz’ and ‘German Whip’ took the UK by storm at the time of release but as is often the case, the producers were overlooked and pigeon-holed.

After years of hard work and dedication to the craft, Teddy and G.Tank have taken it upon themselves to show everyone what they’re really about with their new album due for release next month, TRKRZ FM. Out on November 13th with features from the likes of Ghetts, Asher D, Moelogo, Kojey Radical, Scorcher, Lioness and more, The HeavyTrackerz hope to prove they’re masters of the music-making profession and can make amazing music regardless of the genre. I’m happy to report that having heard the album - they succeeded.

The album stems away from their grime style and while they still have a couple of grime hits on there, they told me in an exclusive interview that they focused on making music they like rather than the music they’re known for.

“I think where in the last four or five years we’ve been so forced to make a certain type of music, we haven’t been able to actually enjoy it and that’s pretty much what this album is. We’ve been driving and playing these songs because we enjoy them, not because we need to fit some sort of algorithm or whatever. It’s just a vibe. People listen to other stuff, not just grime and drill.”

The two guys behind the group, Teddy (Teedot) and G.Tank are long time family friends, both coming from the Ivory Coast with other African heritage in their families. I asked them what brought them together and they explained it was the fact they didn’t really get the UK music culture here that did it initially.

“I think what brought us together was that we didn’t really get Garage or Grime. The tempo was weird to us. France is obviously very American rap heavy, very hip-hop. So when we came here and the beats were how they were we were like ‘what the hell is this!?’ [laughs] But then they started adding bass to the garage and from there we’d just go to each other's houses and play each other music. We’d make beats on PS1 and PS2 and yeah it just grew from there.”

They both admitted that while Wiley’s Eskimo Beat was a huge influence, it was the classic radio station of Deja that got them into it most.

“Running home to listen to 92.3 Deja so I can go to school the next day and talk about Kano and Dizzee Rascal.”

Tank added that it was the mystique behind the scene at the time too because back then you couldn’t put a face to the name and it made it more exciting.

“There wasn’t a face to the voice. When you go home and listen to them you just know it’s D Double or Narstie from the voice. It wasn’t a particular song, it was the sets and the vibe behind it. That atmosphere was what we wanted to replicate with our friends. What they were experiencing on the radio, we were experiencing in ends with our little bubble and our own community.”

With new single ‘500 Likes’ freshly released, G.Tank revealed that one is probably his favourite song on the album and they explained how the song came together.

“We knew when we made the instrumental that it was one of our personal favourites. The hook was already done by Teddy, we write our own hooks as well. We wrote that song ourselves. We’ve worked with Lay-z before but nobody really knew he was a singer like that at the time.

“The initial aim of the project was to get people from our world and mix them with people from other worlds. We wanted to bridge the gap. For example, when we put ‘500 Likes’ in the group chat half the mandem were like, ‘who’s Kojey Radical?’ We wanted someone that everyone knows with someone you might have to Google.”

Teddy went on to reveal the pair have a long-standing relationship with Lay-z, even once recording an entire RnB album with the grime rapper.

“We worked with Lay-z in like 2015 and made a whole RnB album. When he was doing ‘Shaky’. He pulled the plug because he wasn’t quite ready to come out with it yet but then he did the tune on Skepta’s album with Wizkid. When he did that we said we had to get him ASAP because we didn’t want people to think we were just jumping on him singing because he’s on Skepta’s album doing it. We need to show people you can really do this because they think you’re just an MC.

“Scorcher was a given because you know, Scorcher is Scorcher. Everyone knows Scorcher. With Kojey we just hit him up online because we haven’t worked with him before. When he linked us in the studio he told us that he’s always wanted to work with us from German Whip days, but probably the direction he was going in didn’t really allow him to work with us at the time because people maybe thought we were just Grime. So people wouldn’t shout us cos they aren’t doing Grime at the minute. But we were chopping it up and he realised like, rah, you man aren’t just Grime.

Tank and Teddy revealed to me too that Kojey’s verse was also one of their favourite on the album as a whole but they gave that accolade to someone else to make sure that Kojey didn’t take all the flowers for himself.

Tank offered up a different answer too, although he agreed with Teddy’s notion of the secret Kojey Radical verse.

“I think for me it’s probably the Moelogo one. Some of the lyrics in the Moelogo song are just dope,” said Tank.

The guys revealed to me a few songs and artists that didn’t quite come together for the album this time around, but when I asked them who would be top of their list of UK artists to work with that they haven’t worked with yet they gave some very different answers.

“I already know my answer to be honest, even though she’s not based in the UK but M.I.A is the one for me,” Teddy told me.

“When I was young, in college, she had a song on MTV Base called I think calengalengaleng and I was like ‘what is that?’, ‘who is that?’ but then I realised that she was repping her country hard. That was the vibe on that song and now obviously seeing like Jay-Z using her sample and now she’s on a Travis Scott tune. That would be mine.”

Tank revealed his artist is someone that has actually appeared on two of their songs before, but they’ve never been able to chop it up with him and get a song out just yet.

“Someone we haven’t worked with but we’ve tried, we’re not even gonna front we’ve tried, but Giggs. He’s jumped on Nutcrackerz with Dizzee Rascal and Round Here with Lethal B. It’s a weird one, we’ve met him, spoken to him, exchanged numbers and messages even sent beats and stuff but it just hasn’t happened yet. But that would be sick because it would have to be a dark one. It would have to be muggy.”

The album title is TRKRZ FM, which obviously is a shoutout to the radio stations. But the boys revealed that it was a bad experience at radio that pushed them to make this project become a reality too.

“We were on a radio station a few years ago. We had a two-hour slot and we’d play music but we enjoyed more the interactions. The interviews and so forth. Then that got reduced to an hour and we found ourselves just playing music. But we were playing the music the guy on before we were playing,” Teddy reminisced.

“They tried to sheg it and give us half an hour but we said nah we’re good and that made us feel like, ‘forget radio’. We still love radio but forget radio. Everything is online now, everything is on Youtube. You look at guys like Drake who are releasing playlists and they do it to release as much music as they want. We wanted to be open and say ‘Yo, this is the music we like to listen to!’”

“If it wasn’t for a little hint of fear, TRKRZ FM would have been a lot more experimental and then we probably would’ve pissed off a lot more people!”

Once the album comes out, The HeavyTrackerz are hopeful that people will stop pigeon-holing them and recognise them for ‘just making good music full stop’ because they don’t care about the public perception so much anymore.

“If guys want to say that we don’t make good music then that’s fine, we’re not going to cry about it, we know that’s a lie!”

If there is one thing they made clear in the conversation, it’s that they’re done being known for just one song too.

“Every time we shake hands with someone its like, ‘here’s The HeavyTrackerz the producers behind German Whip’, we hate that. Don’t do that. Stop doing that.”

TRKRZ FM is scheduled to be released on November 13th and will be available buy and stream on all major platforms. You can watch the video to their latest single off the album, ‘500 Likes’ featuring Scorcher, Lay-z and Kojey Radical here too.