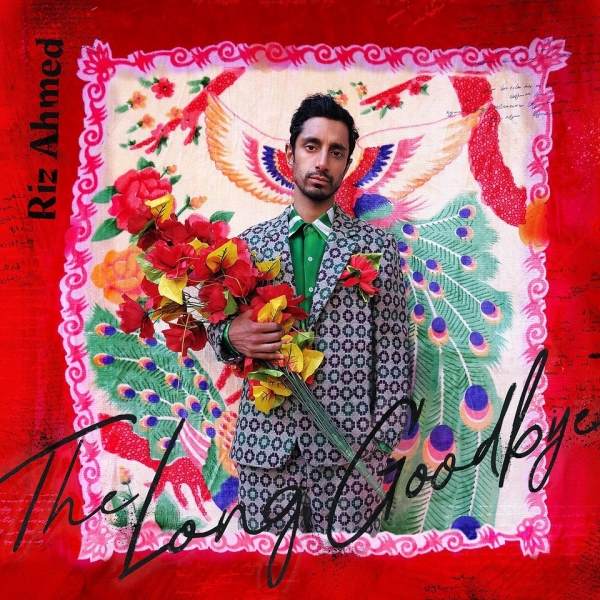 Riz Ahmed is an exceptionally talented actor-writer who is having a real moment, as he comes off the back of 2 critically acclaimed films, The Sound of Metal and Mogul Mowgli. The Sound of Metal has earnt him 38 nominations, winning 17 of those and for his role, he has predicted to get an Oscar nomination. Mogul Mowgli has got 3 BFI Film Awards, one of which he won for Best Debut Screenwriter. Riz is finally receiving the recognition he deserves after years of putting the work in.

But what many forget is that Riz Ahmed is also a rapper. Performing originally under the name Riz MC up until recently, Riz Ahmed started his music career with the controversial ‘Post 9/11 Blues,’ in 2006. Since then as Riz MC he released an album ‘Microscope’ and a mixtape ‘Englistan’ along with teaming up with Heems from Das Racist and producer Redinho for 2 releases as Swet Shop Boys.

And then last year, Riz Ahmed released his best work to date. Released on March 6 2020 ‘The Long Goodbye’ is the first album released under his own name. And the album is Riz at his most honest and vulnerable. ‘The Long Goodbye’ is a breakup album, as Riz breaks up with Brittany. But from the first line of the album, it is revealed that Brittany is in fact Britain and the whole album is a metaphor for Riz’s break up with his country. A break up brought about by things like Brexit, the rise of the far-right, racism and islamophobia.

Throughout 9 tracks, Riz takes us on a journey through the heartbreak, the anger and denial, the acceptance and realisation of where you are at now, and how that affects his self-esteem and ultimately a hopeful and optimistic ending, as he gets back on his feet and learns to love himself after the years of rejection, hatred and prejudice.

There’s a heaviness to the first part of the album, the justified anger is present, as Riz takes us through the history of the relationship between himself and Great Britain and by extension, South Asia and Great Britain. The opening track ‘The Breakup (Shikwa)’ talks about colonisation and the effects of the partition. The story continues on ‘Toba Tek Singh’ as Riz raps about everything Britain has done to him and his people.

As the album continues we see Riz fight back on tracks like ‘Fast Lava’ then deal with the fallout from the breakup on ‘Any Day’ and ‘Can I Live’ as he actually begins to analyse what this breakup means for him until he begins to look at himself on ‘Where You From’ answering the annoying questions as he begins to look at what his status as a British Asian means.

The last section of the album is Riz getting back on his feet, ‘Mogambo’ an anthem of resilience, ‘Deal With It’ the realisation that he no longer needs Britain acceptance until finally, we get to ‘Karma’ at the end of the album, as Riz celebrates himself and his achievements, a moment of self-love, the ultimate act of defiance in the face of hate.

A big theme that is present throughout the album is the theme of no man's land. As he told Apple Music "And to me, I always think that we're in this ‘no man's land’ but actually there's so many of us there, it's not ‘no man's land’, it's our land.” That's who Riz is speaking for on this album and he does that through lyrics, production and references.

In these 9 tracks, Riz Ahmed perfectly articulates the experiences of so many British people, who feel more and more like they’re pushed to the fringe of society. For someone who is becoming as popular as Riz is, this is a bold and powerful statement. While being a deeply personal album, Riz also takes on the mammoth task of creating a piece of work that can be an anthem for people. This is bolstered by the production on the album, provided by Redinho. Redinho blends Bollywood, bhangra qawwali, grime, hip hop, jungle into these banging beats which Riz then uses to tell the tale of his breakup. By drawing on these influences, Redinho takes the soundtrack of Riz’s life, all the music that has had an influence on him and morphs it into this immersive experience. And Riz know that these songs aren’t genres that only he has been listening to, he knows that there’s a generation of people brought up on their parents playing qawwali and watching Bollywood films, playing Bhangra in their car, but also being at Jungle raves, buying Hip Hop albums and listening to grime on pirate radio. This album is the anthem for that generation.

And this dichotomy continues beyond music, Riz perfectly articulates the different influences that make up his world with lines like

"This is for the mosque and the mosh pit"

"Riots, we turned Bradford to Karbala, Just want a zoot, a cup of tea and my country back, Porsche, a portion mixed grill my sadaqah, Live with Mum, bought a Bimmer, 'Cause Heaven's at her feet, Wilmslow Road on Eid's Madina"

"Edgware Road on Eid, poppin E's in the E-class Benzy."

"I'm John Barnes in the box, I blaze hard after mosque"

This is a very lived depiction, with Riz speaking from experience, speaking for both himself, but also an entire generation.

Born under a sun that you made too hot for us,

Kidnapped by empire and diaspora fostered us

Riz’s lyricism also takes from these influences, for example, he takes one of the biggest rappers in the world and combines him with political philosophy for lines like “I mask off, I'm Future meets Fanon,” or when he plays on the Fugees’ classic song “I'm in the in-flight magazine when the TSA stop me, They don't like no 'fugees, but still killin' us softly.” These shared cultural references make the album relatable, and the quick-wittedness gives the album a light touch. Riz is dealing with a very heavy subject matter but he does so with sardonic humour, which still makes the album fun. This is bolstered by the voice messages throughout the album from people such as Hasan Minhaj, Asim Chaudhry and Mahershala Ali.

The Long Goodbye is an incredibly powerful and important album and one that should be up there with classic albums released in the UK. Riz packs so much into the 9 songs, references to history, politics, institutional racism, islamophobia, his own story and experiences coupled with the story of Britain's history with South Asia. And he does that in such an intelligent and clever way, that it never feels too heavy.

The Long Goodbye was released on March 6th 2020, weeks before the UK went into lockdown. While released to critical acclaim, I feel there wasn’t as much talk about it as there should have been, partly because all of us were so glued to news sites and channels at the time, that in a strange way the album flew under the radar of many. But at a time where we are all at home, an album that reflects so deeply about what home means is perfect listening. A year later, this album feels different, as post-Brexit Britain realised that it was the same people that they had otherwise that were keeping the country going. And that is the sign of a classic album one that can be listened to again and you can find new things in it. ‘The Long Goodbye’ is an album that can be both a time capsule to a particular time but can also mean different things to different people at different times.

Another sign of a classic and especially a high concept one like this if you can take individual songs and listen to them isolated from the rest of the album and still enjoy them, and this is true of this album. On 'Any Day' he brings in the legend Jay Sean (whose voice immediately takes me back to sitting in the back of my friend's sister's car as we made our way to Park Royal) which for me is one of the highlights of the album and was one of my most played songs of 2020. Songs like 'Deal With It' and 'Karma' could easily be singles and stand on their own two feet. The albums pay off more if you listen to them in full, but songs hold up on their own.

There's a long tradition of highly heralded British albums that stick to a concept like Skinnyman's 'Council Estate of Mind,' Klashnekoff's 'Iona', Dave'sPsychodrama,' Ghetts' recent 'Conflict of Interest.' And there's also the tradition of British albums that touch on real issues in a meaningful way like Kano's Made in the Manor' and 'Hoodies All Summer' and Dizzee Rascal'sBoy in Da Corner.' 'The Long Goodbye' does both of these things and Riz is able to execute it perfectly.