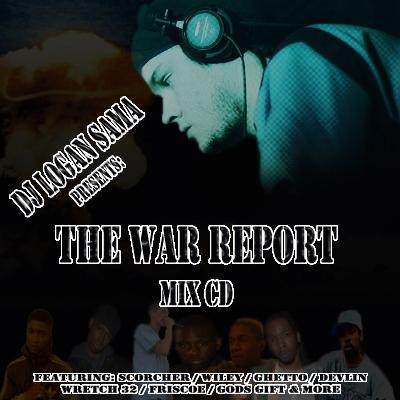 Over the Christmas period, there has been a series of songs from Wiley, Dot Rotten and Jaykae all sending for each other. This whole situation continues to escalate, with Wiley now sending for Stormzy and AJ Tracey on Twitter.

But one tweet, in particular, stood out to me during all this, and it was this one from Logan Sama:

I'm retired from reporting war though.

This tweet took me back to one of the most exciting Grime wars that I have been witness to, Wiley vs The Movement.

Logan Sama’s Kiss 100 show was event listening. You were guaranteed a crazy set and exclusives tracks each week. I remember chatter in the playground the following day, heading to the RWD forum to download AzaT rips, I even downloaded Audacity in order to be able to rip tunes as they are played, then sending them around school via Bluetooth the next day (I did always buy releases though!).

At this time, there was also the establishment of 2 major crews in the Grime scene, Boy Better Know and The Movement. Boy Better Know emerged from the visionary minds of JME and Skepta, establishing themselves as a record label as well as a brand. They scooped up Wiley and Frisco and even released a couple of Tinchy Stryder mixtapes. The Movement meanwhile came together like the Power Rangers words used to, a group of likeminded MCs creating a huge buzz for themselves and emerging as a unit. I have written before about Ghetts’ run at this time, but the other MCs, Scorcher, Wretch 32, Mercston, Devlin and Lightning were also making waves within the scene. As these 2 crews built themselves up, fans started speculating when they might go at each other.

Then the first shot was fired. One night on Kiss, Logan played ‘Nothin Less’ with Wiley spitting lines like ‘I'll rain on The Movement, I've made an improvement.’ and ‘Oi Mercston, I know you're my little bro, Right now I'm 'bout to bury your crew’ and then ‘Do I have to begin to explain the difference between our levels, This boy heavy Ghetts, I disagreeing’

This was it, finally we were about to see it all go down. The next week people were hyped and tuned into Logan’s show with anticipation. And that’s when we heard Scorcher’s response. Over the same beat as Wiley’s original song, Scorcher sent a few shots back at Wiley, showing that the beef was bubbling up.

But Wiley being Wiley pre-empted the response from Scorcher with 2 songs himself. The first one, I’m a Sinner was over a Various Productions beat that sounds like it was produced on a spaceship from 3006. Wiley also was his usual self, by complimenting someone while dissing them: ‘I'll piss on The Movement, it's only Ghetts said, "Fuck Radio" way before The Movement, Scorcher has made an improvement, But hey, I'm Wiley’ And while Scorcher had responded, that wasn’t who Wiley he wanted, his shots were aimed at Ghetts ‘Why oh why oh did you send Taio? He's a lightweight, If I'm gonna be swinging, then it's gonna be the right weight.’ This continued on the other song Wiley released that week ‘Cool Off’ where at the end he says ‘And he can keep sending people, Keep speaking to me like, keep speaking, Hold tight Ghetto, you're a coward, You should be stepping up, I don't know why you're letting Skywalker do this’

The next week is when it started to turn into a Royal Rumble/Survivor Series type situation when Jammer jumped in. He was on Boy Better Know and had previously exchanged words with Scorcher on a set, so he took this opportunity. Over a remix of the classic I got 5 on it Beat, Jammer sent shots at Scorcher and the rest of The Movement.

But that week is also when Ghetts finally responded to Wiley. Over the North London beat by DJ Target, Ghetts spat 102 bars directly at Wiley, touching on his age:

'Deep down you wanna take part in this crusade, But soon you'll be wearing a toupee'

'2nd Phaze, sounds like it took 7 days, I don't rate you it's better than your debut, But it's still featherweight'

'I don't lie I just spit bare facts, I might merk Will, Like Doogz, Lethal and Shark did'

And why Wiley wasn’t bigger than he was:

'If you was on my level like 6 years back, Why you no bigger than the kid's air max?'

And a lot of other things! Where Wiley’s sends had been a mixture of direct bars and just general hype bars, Ghetts track was more focused. The anticipation for next week’s episode rivalled that of Game of Thrones. And it did kind of feel like the Red Wedding.

The next week was like a big battle scene. Things kicked off with Lil Nasty, one of the new breed of N.A.S.T.Y Crew, who along with Griminal, were making a lot of noise at the time. He decided to go at Kano and Ghetto affiliates Demon and Dangermouse. This warmed us up for what was coming.

Next up was Scorcher over, a beat that sounds like something out of Zelda, starting off by sending for Boy Better Know member Frisco:

'Through the whole 04, you sent for Wiley, Now I see you on ends with Wiley'

Then he sent for God’s Gift

'And why's God's Gift getting involved and belling my phone?, He ain't on my level, I'm sending him home'

Then back to Wiley, referring to Wiley’s career:

'Look, people, let's get real, his album dropped in 2003, And he's still trying to beg for his next big deal'

And then had a few bars to respond to Jammer:

'And as for Jammer, you ain't no gangster rapper, Fall back, or I'ma have to stab ya'

Following Scorcher was the young prodigy Devlin. Devlin was another one who was starting to make a huge name for himself in preparation for his mixtape Tales From The Crypt, which I still remember getting from UKRecordShop at Lunchtime then sticking it on my phone to listen to while I walked to Tesco. Devlin was 17 at the time, and a whole debate had kicked off when Wiley said Scratchy was the best white boy. Over a remix of the classic Ruff Sqwad Xtra beat, Devlin spat one of the hardest disses to Wiley. Devlin was spitting like it was his last day. With memorable lines like:

'With his eyes bright red and his nose in powder, That's a circle you just ain't getting outta'

'I remember that time in Ministry, Pulled me away and told me fuck Dogzy, What do you think, that I'm just like Blake?, I'm real not fake, O.T to the grave'

The tag was then made to fellow Movement member Wretch 32, who spat over a Scorcher beat for Metaphorically Speaking. Even on a send, Wretch’s trademark wordplay was on show with lines like:

'I don't mind using Will as the Target, Then taking Danny's Weed, I won't breeze, I like Karnage'

And fired a little shot at the rest of Boy Better Know:

And every boy in Boy Better Know better go get a flow, Or don't get involved"

Support for The Movement even came from their affiliates. Scorcher had been in a crew called Cold Blooded, and Cold Blooded member Revolver entered the fray.

But now it was time for the main event, as we got Wiley’s Nightbus dub. Considered one of the best dubs in grime wars, Wiley spat for 6 minutes, much more focused than he had been before. Talking about the similarities between Kano and Ghetts.

'I've studied Kane, I don't need to study you, If I was a coke addict I wouldn't be better than you

'Not spraying in the booth I'm raising the roof, In the dance can't hold me like Flirta you fool'

And talking about the clash that had occurred between Wiley and The Movement:

Following the barrage of songs directed at Wiley that week, it was only right he got a chance to shine, and with Nightbus, Wiley cemented himself as a master of war.

The following week, things settled down slightly. Like when the penultimate episode of a season has all the madness and then the last episode ties up loose ends. And it also seemed like everyone had something to resolve with Scorcher. First, we got a response from Frisco, later on in that same night, Logan received a text saying something had been dropped off to him downstairs. It was a response from God’s Gift who released one of my favourite songs of the whole thing. And finally, things wrapped up with a send from Snoopy.

After this, the beef died down. There was still some sends on sets, with Skepta and Ghetts getting into it a couple of times, but the back and forth weekly thing stopped. There is even the legendary freestyle session from The Movement DVD involving The Movement and Boy Better Know.

Grime has produced some amazing back and forth lyrical wars, from Ghetts and P-Money, Chip beefing everyone, P-Money and Dot Rotten, Wiley’s various wars and the one just recently between Dot Rotten, Wiley and Jaykae. But for me, as good as they were, nothing has caught the same amount of excitement as The War Report. Maybe it was a case of right place, right time, right age. In 2006 I was in my final year of secondary school, I should have been revising. But instead, I was spending Monday nights listening to Logan Sama from 11 – 1.