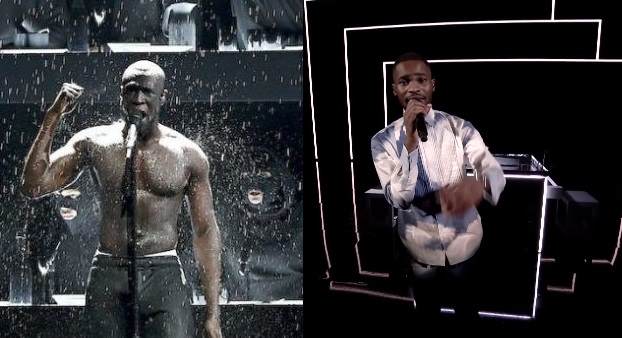 When you talk about political rap in this country, a few names are always mentioned, with Lowkey and Akala being frontrunners in that conversation. These 2 have proven time and time again, through their lyrical ability and knowledge that they can make informed and persuasive political statements.

But the truth is that unfortunately, artists like them are unlikely to have their views heard on mainstream platforms. For instance, you might see Akala on Newsnight, or Lowkey doing an Oxford address, but it is harder for them to get a chance to speak their views at an awards show or on the radio. That is why it is so important when artists that do have those platforms, use them to speak truth to power. I have written previously about Lethal B’s interactions with the government and the impact that had. And now we are seeing it again.

This past week Dave used his Brits performance to put across a powerful message. Performing ‘Black’ the first single from his critically acclaimed album Psychodrama is important as it is. In a country where xenophobia and racism are rising, Dave’s anthem with lines like “And show you pictures of our fam on their knees, Tell us we used to be barbaric, we had actual queens” is a huge statement of empowerment. And the image of Dave performing on stage, just him and a piano (then support from Fraser T Smith) was iconic: Dave dressed in light colours; Fraser T Smith dressed in black; the images being projected onto the piano.

Closing out his verse from the original song with the lines “Black has really got the sweetest flavour, here's a taste of it, But black is all I know, there ain't a thing that I would change in it” some might have thought that was the end. But Dave rose from his chair and debuted a new verse which aimed straight at the top and would have even more of an impact:

It is racist whether or not it feels racist, The truth is our Prime Minister is a real racist

These 2 lines are particularly important in a week where Number 10 Downing Street chose not to distance themselves from racist comments made by an adviser. And Dave has also brought racist comments that Boris Johnson has made in the past to light.

Dave also used his verse to highlight the difference in reporting for Meghan Markle and Kate Middleton which other people within the media have tried to ignore and downplay:

Now if you don't want to get it, then you're never gonna get it, How the news treats Kate versus how they treated Megan

And asked questions about 2 of the biggest tragedies in the UK over the last few years:

But Grenfell victims still need accommodation, And we still need support for the Windrush generation

Dave closes out the verse with “Reparations for the time our people spent on plantations, I'm done” before dropping the black mic, on the all-white piano, a potent image.

Dave’s new verse has received praise for his passionate outpouring, causing a wave on social media, the news and from politicians themselves, with support from Jeremy Corbyn and John McDonnell, the shadow Chancellor. On the other side of the spectrum, Home Secretary Priti Patel has come out to claim Boris Johnson is not racist, and that Dave had made a generalisation. Dave’s verse has created reactions and is forcing people to have conversations, and maybe bringing awareness to fans of his and Brits viewers who might not have been aware of some of the things he spoke out about.

This isn’t the first time Dave has delved into political topics. His 2017 song ‘Question Time’ was a direct message to Theresa May, the Prime Minister at the time, Jeremy Corbyn and David Cameron. Dave uses the 7-minute song to question Theresa on Britain’s involvement in Syria, NHS funding ad the Brexit promises, Britain supporting Saudi Arabia but not Palestine and Theresa May’s terrible actions following the Grenfell tragedy. He then targets David Cameron, questioning how he started the Brexit referendum process then ducked out as soon as it happened. And lastly, and what might be the most powerful verse in terms of depicting the feeling of young people, he takes Corbyn to the task. Now, much has been made about the youth’s love of Corbyn. But the truth is that there are still many people who are distrusting of politicians, Corbyn included. After all, some of us lived through the election of Tony Blair, the optimism that came with it, and then the disappointment as he dragged his party more centre.

Question Time is a powerful song, but Dave was in a different position than he is now. His album was yet to be released, he was still up and coming. Now he is in a position where his words mean a lot more, reaching more people. This performance from Dave is one we are going to be talking about for years to come. Just like we talk about Stormzy’s.

2 years ago Stormzy was on top of the world. At the 2018 Brits, he won British Album of the Year and British Solo, artist. But his performance is what evokes the most memories. For someone in Stormzy’s position, it could be easy to go out, perform one of your hit songs and keep it moving. But no Stormzy used his platform to send a message. As Blinded by Your Grace part 2 wrapped up with the rain pouring, the voiceover stats proclaiming “this country needs to understand what is about to happen” with Stormzy kicking off this new verse with

Stormzy wasn’t here to indulge in conspiracy theories, just facts. And then Stormzy targeted the head of the country at the time

Like, Yo, Theresa May, where's that money for Grenfell? What, you thought we just forgot about Grenfell?

Stormzy continues his verse, pointing out the double standards in politics and the media:

You're criminals and you got the cheek to call us savages, You should do some jail time, you should pay some damages, We should burn your house down and see if you can manage this, MPs sniff coke, we just smoke a bit of cannabis

And predicting the media reaction to this verse and given a pre-empted response to the vile Daily Mail:

They'll get me for this so be woke, This year I'm dishing out L's and free smoke, They tell us that we're thugs, I try and bust the myth, But someone tells the Daily Mail they can suck my...

Stormzy's verse caused waves in this country and positioned him as the voice of the people. His verse, just like Dave’s, questioned the government’s response to Grenfell, a question people still have. The fact that performances that are 2 years apart still have to question why more hasn’t been done for those who lived in Grenfell is crazy. And just like Dave’s, Stormzy didn't mince his words, they both went straight at the prime minister, the leader of the country.

Stormzy and Dave are 2 of the most popular and important artists in our country at the moment. They could easily sit back and continue receiving critical acclaim, awards and financial reward for the popularity of their music. But they recognise that they are the voices of people who might not have a platform and that they have a reach that not many others have. And with that they put their necks on the line to deliver a message, knowing that they will get attacked for it, knowing that they will piss people off, but knowing that these things need to be said. “Political hip hop” is important in developing and maintaining grassroots activism. But it is artists like Dave and Stormzy that will ignite fires in places that other artists cannot reach. And that’s what makes them such a powerful force in this country.