HomeExclusivesREVIEW: Dave's stirring sophomore album 'We're All Alone In This Together' lives up to debut

REVIEW: Dave's stirring sophomore album 'We're All Alone In This Together' lives up to debut 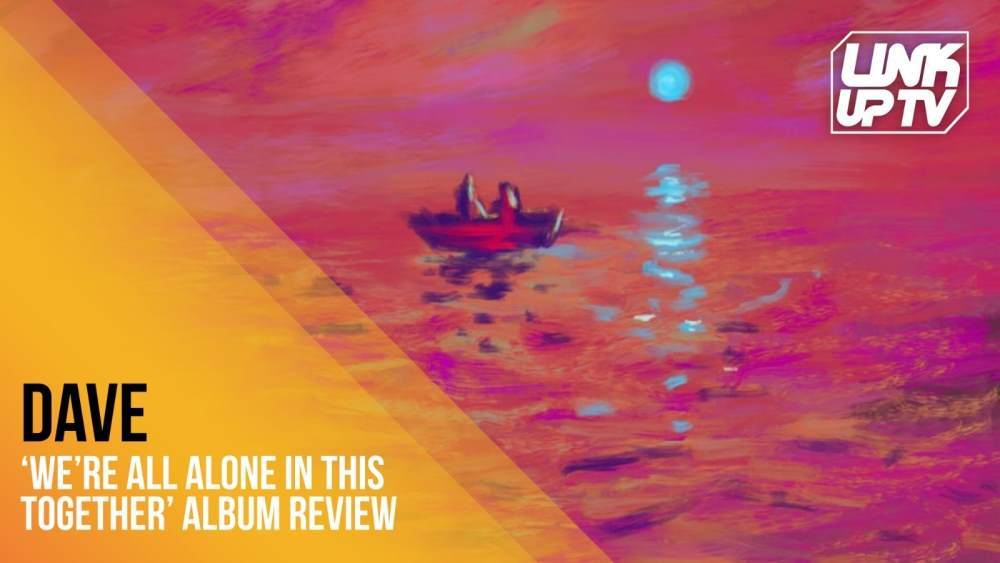 To follow up an album with such incredible acclaim as Psychodrama is no easy feat. The debut album from Dave went straight to Number 1 in the charts and received rave reviews. It was so well-received that the young rapper from Streatham earned himself the highly coveted Mercury Prize and won a BRIT award for best album – a very high bar set for a debut. Going into this sophomore full-length project, We’re All Alone In This Together, many wondered if Dave would meet the high expectations he had set for himself previously.

In the opening track ‘We’re All Alone’, Dave showcases that he has what fans would expect from a young artist who is already so highly rated in his field. From the impeccable clarity in his delivery, to sonic switch-ups and the sheer intelligence of his bars, this track right here is the desired start to an album as highly anticipated as this. Ranging from flexing bars, to deep bars that get the listener thinking, the pace is set from the get go, instantly giving listeners the feeling that Dave is about to take you on a real journey.

Throughout the rest of the album Dave takes us on an emotional ride, touching on incredibly sensitive subjects such as the awful treatment of the Windrush Generation on ‘Three Rivers’ in a no holds barred manner. In true Dave fashion, the rapper avoids beating around the bush and ensures that nothing is left unsaid. Either the listener will be inspired to think or be left with an evoked emotion, no other option is left.

Upon first look at the tracklist, it appears there are only a few features from the likes of Grime heavyweight Stormzy, stunning vocalist's Snoh Aalegra and James Blake, and upbeat afro vibes delivered from Wizkid and Boj. However, Dave gives us a surprise treat in the form of ‘In The Fire’. Although no features are shown on the tracklist for the song, it has plenty. West London rapper Fredo opens the track and is followed by Meekz, Ghetts and Giggs, making this track an incredibly welcomed surprise. Every artist featured delivers as though they are competing to have the best verse, all operating at the very top level – Dave included. The shock factor of the first listen lead to it trending on Twitter – as well as how exceptional the song is, standing as a brilliantly executed move from Dave and his team.

Dave has to be praised for his dedication to his craft. One thing that is very noticeable on this album in comparison to Psychodrama is that Dave has worked on his versatility by improving his vocals. Tracks like ‘Twenty To One’ show stark improvement in comparison to ‘Voices’ from Psychodrama, showing the noticeable difference in his vocal ability; which as previously mentioned is testament to his dedication to wanting to perfect his craft.

Personally, the standout track on this project has to be ‘Heart Attack’. Despite it being 10-minutes long, which could be off-putting to some, it is 10-minutes of Dave straight barring about a host of thought-provoking topics. The rapper also opens up on a deeper level, delving into sensitive topics which allow his courage to be vulnerable only to be admired. The track opens with the same line and flow that Dave opened with on ‘Panic Attack’ from his debut EP, Six Paths, and this track feels like a nod back to its predecessor. With a heartbeat captured in the background of the production, a pure acapella at the end of the track, followed by the incredibly personal sound clip of what we can only assume is Dave’s mother, 'Heart Attack' is bound to make listeners feel some sort of emotion. It is phenomenal from start to finish.

Between all of the tracks with heavier subject matter's, Dave recognises the importance of fluidly bringing balance to lighten the mood as he takes them on an emotional journey. Tracks like ‘System’ featuring WizKid, and ‘Lazarus’ featuring Boj, are the perfect way to lift the project back up following the important issues raised on ‘Three Rivers’. Catchy production from the likes of Jae5, Kyle Evans and P2J are ideal to accompany Dave in raising the energy.

All in all, We're All Alone In This Together feels like the work of an artist who has nurtured his craft, and is only going from strength to strength with his releases. The album's structure and crystal-clear production contribute to Dave's stunning talent's, resulting in a standout album. Not only will some of the tracks be pivotal moments for Dave, but they will also stand as memorable for the UK scene as a whole. Dave says things that other rappers won’t and does it eloquently, with real conviction and passion. His intelligence, storytelling abilities and gift to stir emotions are not to be denied. And his excellent feature choices and versatility, whether from flexy number ‘Clash’, vibes of ‘System’, the melodic nature of ‘Twenty To One’ or the real rap tracks speaking on bigger issues like ‘Three Rivers’, it's clear that this album has potential to be a timeless classic.

To answer my previous conundrum as to whether or not this album lives up to the standards set by Psychodrama, the answer has to be an emphatic yes. Listen to We’re All Alone In This Together on streaming platforms now, and let us know on Twitter what your favourite track on the album is!