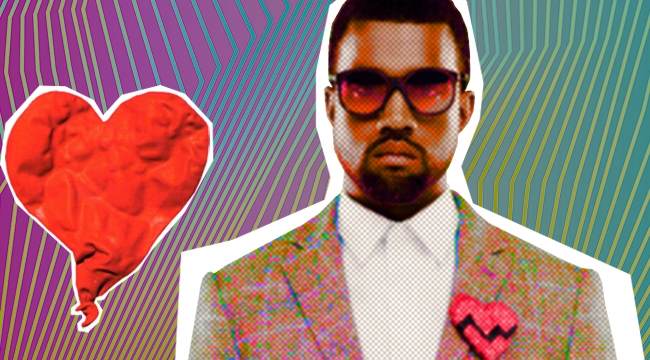 Welcome back to the series where I break down the career of music's most polarizing figure, Mr. Kanye Omari West. We already explored his career beginnings as a 'College Dropout', solidification of style and success throughout the 'Late Registration' era and his 'Graduation' to Hip-Hop royalty. Having ascended to the very top with three cultural classics under his belt, where would Kanye turn next? Catch up if you need kids, this is where the waters get a little rough and reality is given the slip.

The new king of the scene had been crowned. Ye’s victory over rival and fellow rap game titan 50 Cent in album sales indicated new directions for the industry, new sounds had begun to spread their roots deep into the genre's foundations. The electronic influences in production, the lyrics that refused to shy away from insecurity as they blurred the lines between humility and bravado. These things feel like mainstays in the modern fabrication of the culture, but it’s easy to forget it was Ye who introduced and perfected these trends and evolutions. For the self-proclaimed genius the future seemed nothing but bright. He’d hit the three-peat home run and left his contemporaries at the wayside, but life had reality checks plenty just waiting around the next bend.

Cosmetic surgery has become so popular and seemingly routine, the fears of major complications in procedures existing under this umbrella seem like things of the past. People forget that in the pursuit of the perfect image real side effects exist, with major and potentially fatal complications. Donda West undertook a myriad of operations within a short window of time, with things going to plan in early stages. Despite pleas from medical professionals however, after her final one, she opted to leave supervision inside the facility to return home. A sore throat became the first worrying sign, with tightening in the chest closely succeeding. After collapsing she sadly passed away on that cold November night back in 2007. The devastation was the obvious reaction from Kanye, although I would say the use of that word is an incredible understatement.

Ye began to direct his anger and denial in several directions, including the doctor responsible for carrying out the op. He even blamed himself, labelling Donda the biggest sacrifice made for his life in the limelight. Kanye took this heavily, more heavily than most can imagine. Think about feeling responsible for your own mother's death, the constant weight that would place on your mind. This wasn’t just a passing phase either. Adamantly he has blamed his own success for the tragic happening, and in my opinion, this signifies the beginning of his transformation into modern-day Kanye. He was changed forever. No longer did we see the smile or light behind his eyes, no longer would he hear the celebratory horns and triumphant choruses of albums gone by. The icon had entered a lasting depression, opening the door to a world of mental health issues which would play out unforgivingly in the public eye.

I can’t imagine how Kanye felt losing the only person in the world who truly understood him. Seeing him break down on stage during a performance of ‘Hey Mama’ was a haunting yet powerful moment and a clear depiction of West’s human side so often forgotten by the masses. But how would he answer the hell unleashed upon him? How would he navigate a world turned upside down? Through music, of course. Ye would begin work on one of the most transformative and genre-crossing rap albums of all time. ‘808’s and Heartbreak’ lay on the horizon.

I can recall that time so well. Having just experienced the gargantuan production of the post ‘Graduation’ Glow In The Dark Tour my anticipation for his next project was reaching fever pitch. When ‘Love Lockdown’ dropped I didn’t know how to react. After ‘Stronger’ and ‘Good Life’ here we were presented with an emo inspired ballad, dripping in dark imagery and a mood brought directly from the shadows. This was also the first time I’d heard Ye sing for a track’s entirety. Many initially criticised his heavy use of autotune, but as ever he was beginning a major industry trend. The use of the program was entirely intentional and his experimentation of its limits to me was impressive. How many artists riding the waves of the trap game rely on this very software? Would we have been gifted groundbreaking auteurs like current Kid Cudi or Travis Scott without this album? Juice Wrld? I think not. All these guys are products of West’s boundless creativity.

For the Chance fans in the back, this project's original title was ‘Good Ass Job’. Despite never coming to fruition, this label has been littered throughout the various works of both artists and inspired the famous 3 hat that Ye’s prodigy now rocks at any given opportunity. I would love to eventually see the joint effort they have supposedly been cooking up for years but that’s a conversation for another day. 808’s seemed a more fitting moniker for his fourth studio album, better reflecting the distress he was being subjected to. The themes of loss, heartbreak and alienated fame would all be woven into the tapes disquieting tracklist, conveyed through the means of the acclaimed Roland 808 drum machine. Ye never stands still, and in breaking his own previously set mould his embrace of autotune can now be seen as a genius play. Yes it was new and people didn’t initially know how they felt about it, but just look at the impact it has had on music in general to this point.

Kanye stood above the critics. It’s become a regularity to see him experiment with new sounds to mixed reception, but the industry always follows suit within the next 5 years. Kanye is unwavering in his self backing, he trusts his musical ear and judgement and who can really blame him? My money will always be on him to produce commercial success. Why exploit tried sounds and influences when you can blaze ahead with exciting new traditions?

“Some people don’t like autotune, but I do. So I use it, you know why? Because my name is on the album”.

In bringing his vision to life Ye not only welcomed the influence of new instruments and sound equipment but an entire team of talented artists and producers as well. Each track was built by up to 5 writers, with Mike Dean, A-Track and many others contributing significantly. Cudi was credited on 4 separate songs, and the influence of artists like Phil Collins became incredibly apparent. The palate of genres and sounds absorbed by our creator is limitless, and his decision to reverb and distort the drums and snares through the tracklisting has become one iconic in production. Michael Jackson's imprint on Ye’s young mind is also clear, and it’s crazy to think that it was MJ himself who suggested he begin singing in the first place.

Ultimately, Kanye wanted to pour out his feelings through sheer melody. He squeezed the breaks on his use of samples and embraced the use of his own harmonies, creating hits like ‘Amazing’ and ‘Heartless’ in the process. His live output was also changed, with some of the rawest and emotionally driven performances ever seen from West projected onto our screens. The album may have divided the community upon release, but the indisputable influence of it is still felt today. Drake attributes a lot of his current sound to this point in Ye’s career. He wasn’t the first to open up about his feelings in the booth of course, but rappers today would not nearly be as open about their feelings and emotions without this listening experience.

Kanye carried out one of the most inspiring feats, he took his suffering and turned it into something breathtaking. Instead of exploiting his anguish, he allowed us to experience his pain with him, all while setting the blueprint for an entirely new generation of rappers to come. This is the mark of a true artist. This experience full of sorrow created something lasting and great, and more importantly set him on course to bring to life his magnum opus… My Beautiful Dark Twisted Fantasy.

See you next week.